Home Politics “Mark my words, Am the next Lord mayor ” Gen Tumukunde to...

Former minister of Security, Lt. Gen. Henry Tumukunde, has assured his supporters that no one can defeat him in Kampala.

Appearing on one of the local radio stations on Monday, Tumukunde cautioned his competitors that competing with him is like climbing Mountain Everest.

“I am not the usual Tumukunde and never a failure in life, People have trust in me and they will vote for me, competing with me is like climbing Mountain Everest,” he noted.

He said that he is not shaken by any politician who is eyeing Kampala Lord Mayor’s seat come 2021.

“I am not worried. I am not under pressure. I am not going to tell lies, propaganda. Let me tell you the assurance that whoever is contesting with me, will find me not an easy competitor,” he said.

He cautioned his competitor that he is not as lightweight as they may think and it won’t be easy to counter him.

Tumukunde who is quietly carrying out consultations noted that the reason why most leaders find difficulties in their administration is a failure to carry out research to establish the core issues affecting their voters.

“The reason why some of these leaders reach offices and find it hard is that they don’t do research, you can’t get medicine before you establish the sickness,” he said.

He denied carrying out early campaign noting that he is only moving around to find out the views of the people whether he will be capable of the task ahead of him or not.

He said the door to door consultations will also help him to establish some of the challenges faced by the people of Kampala so that appropriate remedies are provided to curb the problems.

“I am so calculative, remember days back then when bombs had become rampant, I decided to undertake that task and the rest is history and that is why I am a Ugandan who isn’t the usual,” he said. 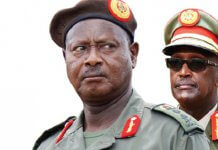 Details: How & Why Tumukunde fell out of Museveni’s Grace