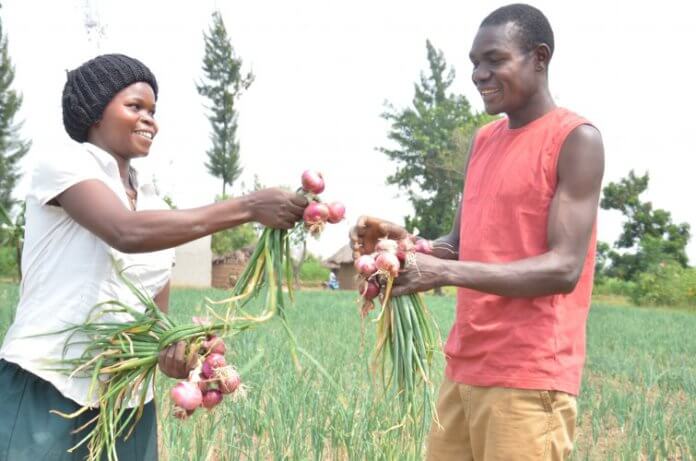 Onions take just about two months to give you money from the day of planting. This means that with these short rains, you can still plant onions. One of Uganda’s biggest imports from Tanzania are onions and there is a big market at the moment.

Tanzania is the leading producer of onions in the region and it also supplies Kenya. And yet, onions can be grown in a wide range of climatic conditions, are quite hardy and can tolerate temperatures as low as -6°c. However, good bulb formation requires temperatures from 15.5°c with an optimum temperature of 21- 27°c.

In Uganda, most of the large scale (five to 10 acres) onions are grown in Sebei region, which comprises Kapchorwa, Bukwo and Kween districts. They are also grown in Bulambuli, Sironko, Mbale in the southwest, areas around Kabale, Kisoro, Kanungu, Rukungiri, Kasese, Rubirizi and Kabarole.

Low level production (with one to three acres) of onions is carried out in Mubende, Mityana, Luwero, Hoima, Masindi and Kamuli districts.

An acre takes 2kg of onions at a cost of about sh1.6m-sh1.8m. The cost of labour and other farm inputs takes sh5m per season, making the cost of production about sh7m.

The cost per acre includes the sh1.8m used to buy seeds, about sh1.5m for clearing and ploughing the land, sh2m for labour to transplant and general maintenance of the seedlings from the nursery to the main farm, plus sh1.5m on fertilisers such as lime.

Joseph Gombya, an extension worker, said onions do best in well-drained soils that are at least 650mm deep, shallow soils may be utilised, but with proper adoptions in management practices. Examples of good management include proper transplanting, spacing and irrigation.

Ensure a PH range of 6.02–6.8. Lower PH levels can result in problems with regard to fertilizer uptake since you have to put in a lot to effectively fertilize the soils. To tell the PH, you must take soil samples for testing to a recognized soil testing lab. You can take it to Kawanda, Kabanyoro, or any research center that is certified to carry out soil testing. A single test sample costs sh30,000. And this can be done at least before every planting season.

On well-drained soil, prepare a fine and even seedbed.

If you can afford, it is advisable to use seedling trays to ensure that little or no seed is lost during this process. Seedling trays can be bought from agri-input stores from sh5,000 for every 50 seedlings. The tray can be used several times.

Alternatively, commercial plant raisers can help farmers raise healthy seedlings for use. These can sell each seedling at sh1,00

If the soil PH is less than 6 or the available calcium is less than 2,300kg per hectare, apply and incorporate agricultural lime at the rate of 2,500kg per hectare, about 8-12 weeks prior to planting. The total is around 50 bags of 50kg each. Each 50kg bag of lime costs sh30,000, which means that the farmer spends around sh1.5m on the lime. Lime requires at least two weeks to react with acid soil to raise the PH. Lime is applied once before planting.

Seedlings are usually ready five to six weeks after planting, when majority of the seedling necks are pencil-size (65-80mm) in diameter, 10-15cm tall. This means that if you intend to plant onions at the end of november, you should plant the seedlings now.

Transplanting should be done either very early in the morning or late in the evening. Transplanting when the sun is up affects the seedlings because it drains water from them. Plant spacing: 15-20cm between rows and 8cm within rows.

There are several ways of irrigating your onions. These include using the sprinkler system, which sprays water over the plants. It may be the small, low sprinklers or the water gun or even a drip irrigation system.

Of these systems, the sprinklers and the water gun are cheaper since one unit can be moved from one part of the farm to the other, compared to the drip system which is fixed on the ground. Farmers can also use drip irrigation, however, this may turn out to be more expensive.

A farmer can get a water gun, complete with a pump and pipes at sh3.5m, while laying a drip irrigation system on an acre may cost sh10m. Irrigate 3- 5mm daily after transplanting so as to keep the soil cool and moist.

Direct seeded onions (onions planted from seeds without putting them through a nursery bed) growing under hot dry conditions may require two irrigation cycles per day— in the morning and evening. Water shortage at any stage during growth may result in decreasing yields.

Adequate watering promotes good growth and helps keep the soil firm around the onions. You are advised to water three times a week.

Do not overirrigate as onion bulbs that are over-watered tend to be soft with a poor shelf life. You can realise that you are overirrigating if stagnant water remains in the field.

Onions can also be grown under a greenhouse system, but it may be a waste of space and money, especially in Uganda, because the yields after 100 days may not match the costs of the houses.

Onions develop slower than other vegetable crops and are more susceptible to weed competition, especially during the early growth stages.

This can result in yield losses. Weeds can be controlled successfully through either pre or post-emergence herbicides. Use only registered products from certified dealers.

Thrips are the major pest in onions. If not controlled, they can cause reduction in quality and quantity of produce.