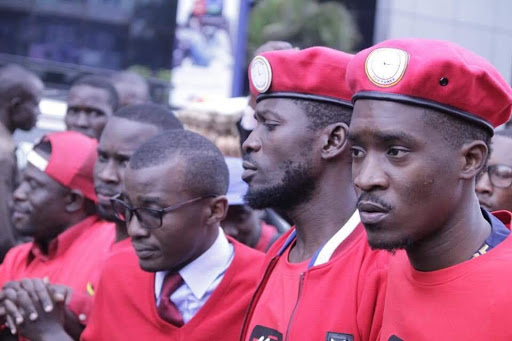 The once renown red barrette die-hard is the latest culprit following his social-media post saying there’s nothing wrong with supporting Museveni.

Apass has been seen identifying with and supporting some of the activities under People Power leader Bobiwine. Apass was instrumental and at the frontline during the city protests against the OTT in 2019 led by Bobi wine.

Apass goes ahead to point out how Museveni should not be blamed for the failure of so many things in the country, yet there are several other leaders who have failed to execute their roles and hence causing the collapse of the system as well.

He also questioned why the blame is put unto the person who gives the money, rather than the people who use the funds.

He however later denied being part of those protests saying his face was photoshopped into the images that made rounds on social media. Well, maybe he was joking being the comical Apass that we know.

The “Ccupa ku Ccupa” singer’s post on his social media page seems to have been taken seriously this time.

He bashed people for being loyal to political parties yet they only blind them from holding the politicians accountable whenever they fail to execute their duties.

Then he urges Ugandans to stop throwing bottles at artists who support Museveni claiming they are not the problem, but rather focus the venom should be directed political leaders who haven’t done much for the country.