As relatives of businessman Sam Buchanan also a close ally to Former IGP Kale Kayihura were asking the court to compel IGP Martin Ochola to produce him in court, he was arraigned before the army court and charged with unlawful possession of firearms.

Buchanan, 49, a resident of Buziga, Kampala, was arrested last week from a hotel in Munyonyo suburbs.

Upon being produced in the General Court Martial, the state presented to the court a charge sheet that included charges of unlawful possession of firearms and ammunition. At about 1:00 pm, Buchanan was produced in court aboard a white van, escorted by Joint Anti-terrorism unit (JAT) security personnel.

Dressed in a red jacket, black pair of trousers and red sandals, Buchanan, who was arraigned before the court at 4:30 pm, appearing downcast before court chairperson Lt. Gen Andrew Gutti.

However, Buchanan declined to take a plea, saying he was arrested over other offences and does not know the case before the court. Nevertheless, Gen. Gutti, on the advice of the judge’s advocate, Col. Richard Tukacungura entered a plea of not guilty.

Lawyer Frank Kanduho submitted that Buchanan can take plea if prosecution discloses evidence to them. Kanduho wanted the state to disclose to his documents, such as witness statements, complainant’s statement, search warrant and detention order, to prepare for their case.

However, state prosecutor Maj. Samuel Masereje said the lawyer’s application is premature, saying at this stage, the accused has a right to say ‘yes’ or ‘no’ and disclosure would be done later.

The prosecution alleges that Buchanan on August 16, while at Buziga in Makindye Division, Kampala was found in unlawful possession of a firearm (pistol) No. UG-INDT 6472-16AP 200502049, which is ordinarily a monopoly of the defence forces. It is also purported that Buchanan, in the same period and place, was found in unlawful possession of 18 rounds of 9mm calibre live ammunition.

The court remanded him to Kigo Prisons, until September 3, when he will re-appear in court for mention of his case. Speaking outside court, a family member who did not want to be named, disputed the charges, insisting that Buchanan’s gun had been legally acquired.

With the recent wave of insecurity, especially where firearms are used in criminal acts, the Police chief, Martins Okoth Ochola, recently ordered a general audit on firearms across the country. Ochoa’s order followed a directive from President Yoweri Museveni, during his address to Parliament in a special sitting where he (Museveni) announced measures that the government would undertake to check insecurity in the country.

According to the 2018 annual crime report, so far, a total of 35,088 guns have been test-fired for fingerprinting and the exercise is “work in progress.” The arrest According to Col Charles Asiimwe, the deputy director of crime intelligence, they arrested Buchanan and three other suspects at a hotel in Munyonyo, Kampala.

On Saturday, a team of detectives raided Buchanan’s two homes in Muyenga and Bunga and conducted a four-hour search in the presence of his family members. At Bunga, the search certificate, signed by detective Assistant Inspector of Police Nelson Natumanya, attached to Kireka Special Investigations Directorate, indicated that they had recovered a letter to Buchanan, from a Japanese business partner. 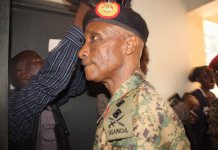