Home International News FUNNY : How Mali dictator tried to escape after being cornered by... 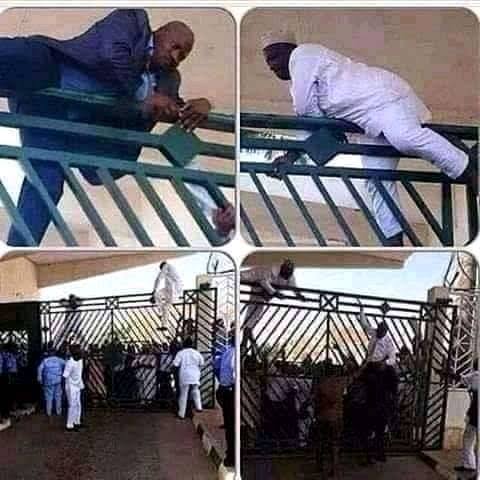 Desperate situations require one to go for even desperate measures to get out of them, and that is exactly what Mali President Ibrahim Boubacar Keita did when rebel soldiers cornered him.

The unexpected coup saw the President arrested before announcing his resignation.

In some photos that have emerged on social media, the President was seen trying to jump over a State House gate.

According to exiled Kenya lawyer Miguna Miguna, the President was trying to flee from the approaching soldiers.

Unfortunately for him, he did not manage to flee in time, he was arrested.

Taking to his social media handles, Miguna has noted that unwanted leaders have no place to hide when cornered as they did to Mali President.

“Malian President and Prime Minister trying to climb the State House gate and flee. There is no place to run when the people come for the despots,” he said.

Rebel soldiers are said to have arrested the President and his Prime Minister, Boubou Cisse, on Tuesday and took them to military base within the country.

This came about after several days of demos of citizens, who called out for the resignation of the two leaders.

On Wednesday, soldiers in their numbers were seen in the town moving towards the President’s residential home as happy Malians cheered them on.

President Ibrahim Boubacar Keita has since announced his resignation.

While reading his resignation speech from military detention, President Keita said he was doing to so so that no blood is shed in Mali.

“If it pleased certain elements of our military to decide this should end with their intervention, do I have a choice?” (I must) submit to it, because I don’t want any bloodshed,” he said.