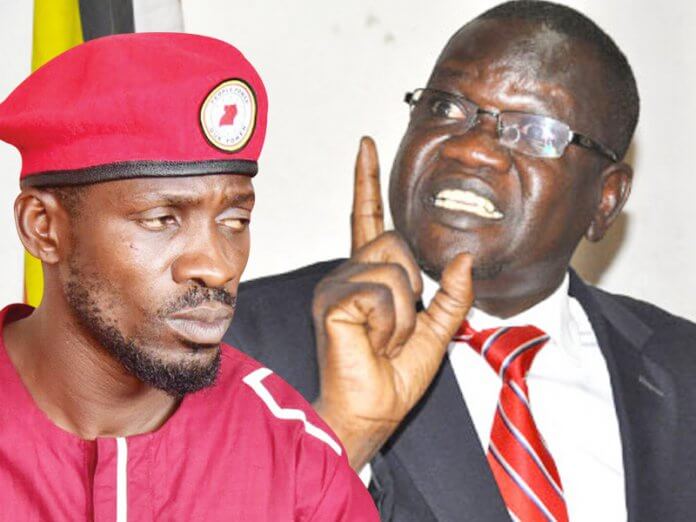 The Forum for Democratic Change (FDC) has expressed exception to comments by Kyadondo East Member of Parliament, Robert Kyagulanyi aka Bobi Wine that he is not interested in holding endless boardroom talks with other opposition forces to forge a coalition.

Bobi Wine, speaking at the burial of late Margaret Nansujje, the mother of Jinja Municipality East MP Paul Mwiru on Sunday, said he was not interested in boardroom meetings which drag on in order to achieve an opposition coalition against President Yoweri Museveni and the National Resistance Movement.

“For us who are on the journey to remove Museveni, we are on our way. In case of any talks, we shall talk as we move,” Bobi Wine said at the event attended, among others, by opposition bigwigs.

Bobi Wine, however, pointed out that he was willing to join efforts with other democracy-seeking forces in the struggle for regime change.

Addressing journalists at a weekly party press conference at their offices at Najjanankumbi in Kampala yesterday, the FDC president, Patrick Amuriat, said Bobi Wine needs to understand that the forces of change have to discuss and that they must do so in a very honest manner.

Amuriat said: “I know that all of us want the regime in power to be removed, but the how, is where the controversy arises. In FDC we believe we should hit the road running and our actions began long ago, while some of our friends believe in elections.”

He reminded Bobi Wine that he cannot run away from the difficulties they are experiencing in their bid to dislodge the Government.

“We have seen Bobi Wine’s consultations being blocked. He was stopped in his own constituency in Gayaza, Kyadondo East, where he represents the people as an MP and where he even ordinarily should be speaking to the people. He was warned by a mere RDC (Resident District Commissioner) of Lira, the person who is supposed to be a civil servant, answerable to us to not set foot on Lira soil,” Amuriat said.

He said there is a need for the forces of change to discuss and unite, adding that FDC was committed to the cause.

“We continue to call on our friends for unity. But first of all to agree that we all want the status quo to change but can’t change through an election by itself. “As FDC we would like to see more action happening than posturing and quarreling on social media. “We need to be more in the field because being on social media abusing each other is not going to help our revolution and fight to free the people of Uganda,” Amuriat said.

Bobi Wine’s People Power supporters have been accused of using social media to attack and demonize particularly, Col Kizza Besigye, who is viewed as a stumbling block to Kyagulanyi’s presidential bid.

At the same briefing, Amuriat announced that FDC was going on with its internal party arrangements to mobilize for the 2021 general elections.

The party, Amuriat said, beginning January 20, will embark on a countrywide program to celebrate with the structures the 15th anniversary of the party. This comes after the national celebrations which were held at Namboole stadium last month.

However, Police have set tough terms for the party to go on with arrangements. They include having the events indoors, no processions or campaigns among others.