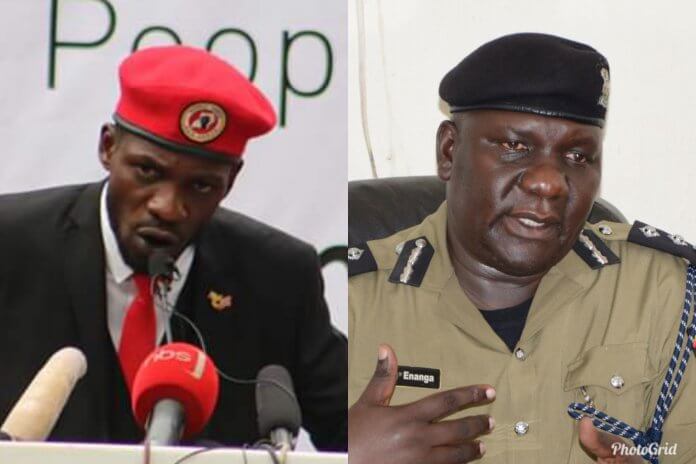 The Police have launched a probe into supporters of People Power, a political pressure group, for involvement in violence.

The Police have a recording of the supporters (People Power), that were caught on closed-circuit television (CCTV) while allegedly planning and later causing mayhem in different parts of Kampala Metropolitan policing area.

Among those caught on spy cameras is Edward Sebuwufu aka Eddie Mutwe, the bodyguard of presidential hopeful and Kyadondo East MP Robert Kyagulanyi alias Bobi Wine. The suspects are under investigation and will face various criminal charges relating to violence, according to a top Police source.

Addressing the weekly press briefing yesterday at the Police headquarters in Kampala, the spokesperson, Fred Enanga, said Kyagulanyi was granted permission to carry out consultative meetings for his presidential bid.

According to a report seen by Ugandanz News Website, the Police started monitoring Kyagulanyi immediately he left his residence heading to the Electoral Commission.

The report shows that Kyagulanyi left home “with a mixture of overloaded motorcycles, rowdy crowds, several cars with people seated atop and others standing outside the car doors”.

The Police report indicates that Kyagulanyi’s crowds wreaked havoc on public infrastructure by burning rubbish, tires and smashing taxi and car windows as well as throwing stones at the Police.

Enanga said the events that transpired on the morning of January 6, 2020, in Kasangati showed a clear and blatant breach of all the Electoral Commission (EC) guidelines by MP Kyagulanyi and his team resulting in the intervention of the Police in the interest of public safety.

He said various narratives have demonized the Police “even after the severe restraint exercised by the officers on the ground amidst all manner of provocations and lawlessness”.

“We have obtained a brief pictorial and video extract of some of the evidence showing the actions of MP Kyagulanyi and his team as they unfolded. It shows mayhem by rowdy People Power supporters,” Enanga said.

He said the video shows overloaded motorcycles with multiple chaotic passengers and no protective gear, rowdy youths running in front of speeding cars, people standing outside overloaded moving cars oblivious to the dangers it poses to their own lives and other road users.

According to the Police, the video also shows rowdy youth in People Power ‘militia’ uniforms and insignia and improvised ranks unlawfully removing the Police barricades from the road and physically attacking Police officers on duty and in uniform; a blatant disregard of Police guidelines and check-points. The Police faulted Kyagulanyi for failing to observe the guidelines provided to him in line with the Public Order Management Act.

“We shall police presidential aspirants who have agreed to hold consultative meetings within the confines of the law. For those who do not want to follow the law, we shall hold them accountable,” Enanga warned, adding that Kyalulanyi “plays dirty politics” by trying to turn consultative meetings into campaigns.

The Electoral Commission (EC) on Friday held a meeting with Kyagulanyi and other presidential aspirants who are seeking to carry out nationwide consultative meetings. The law provides that an aspirant should write to the EC declaring their interest in contesting for a political office.

The EC chairperson, Simon Byabakama, said the meeting was to assure the public that the institution was committed to having peaceful, credible, free and fair elections. The Police report further faults the media saying that the footage shows the journalists covering Kyagulanyi made no effort to capture his supporters who were throwing stones.

According to the Police recording, in one of the incidents captured on camera, when Police fired teargas at “hiding stone-throwers”, one of the rioters in People Power “attire runs across the road and throws the smoking canister towards the cars in the traffic jam.” In another incident, the People Power supporters lit a fire in the middle of the road.

The press covered the fire without bothering about the culprits that lit the fire who were still at the scene and were intimidating and threatening members of the public. The report shows that CCTV footage “clearly shows” press personnel never paid any attention to “the perpetrators of the mayhem”.

“Are some sections of the press oblivious to all the lawlessness as some choose to focus on the perceived Police ‘brutality’ or are the allegations of a level of compromise are true given that some members of the press are actively and visibly embedded in these riotous groups?” the Police report states.

On January 6, 2020, Kyagulanyi held a meeting with the EC chairperson together with the Police at the commission’s office on Jinja Road.

As he was traveling from the commission to Kamwokya, where he addressed a press conference, there was a clash between the Police and Kyagulanyi’s supporters, prompting Police to fire tear-gas.

Contacted yesterday over the Police’s accusations, Joel Ssenyonyi, the People Power spokesperson, said: “We are not aware of any such incident but if the Police have anything against our people, they should take them to court instead of running around in the media.” “Our members are law-abiding so let them charge whoever they suspect in court and let the law take its course,” Ssenyonyi said.