Home National News Video: How Besigye Survived Death after Falling off his Car 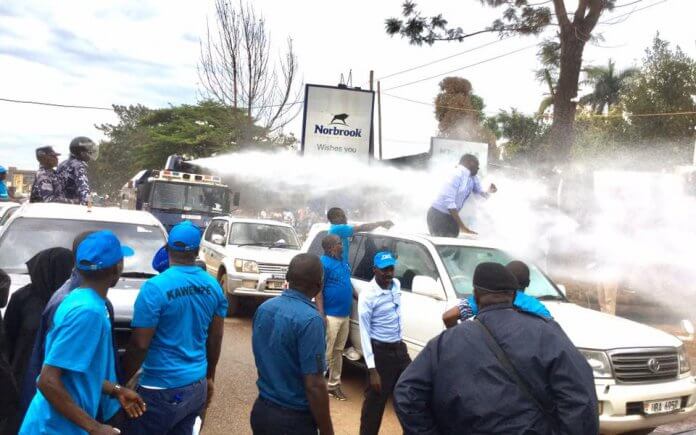 Besigye was on his way for a delegates meeting in Kiira Municipality in Wakiso district.

The former presidential candidate was intercepted, pepper-sprayed as he attempted to wave to his supporters, a move that narrowly made him fall off his white land cruiser car.

In a statement, Bobi Wine, who is the leader of the People Power movement, expressed solidarity with Dr Besigye, adding that the actions of the police towards the four-time presidential candidate are unacceptable.

“I have seen these pictures and the video footage of how the police today brutally used water canons to shove Dr. Kizza Besigye almost off his vehicle, as well as other FDC party leaders. Dr. Besigye was later brutally arrested and taken to an unknown destination. I want to condemn this very savage and cruel treatment of political leaders by those who are supposed to keep law and order. This is totally unacceptable,” he said.

“As we stand in solidarity with our brothers and sisters in the struggle, I call upon all Ugandans to join the struggle for dignity and freedom for all Ugandans. We are reaching out to our comrades to see how we can jointly resist this kind of impunity. Completely unacceptable!” he added.

The windscreen of the vehicle belonging to Dr Kizza Besigye was broken as police arrested him following the Force’s blocking of an FDC assembly at Namboole Stadium on Monday morning.

Dr Besigye was arrested for leading a procession of FDC supporters on their way to the party headquarters in Najjanankumbi after police blocked their national assembly at Namboole.

Party leaders were met by anti-riot police trucks as they sought to access the stadium for the meeting where the party spokesman was also to address the press at 11am.