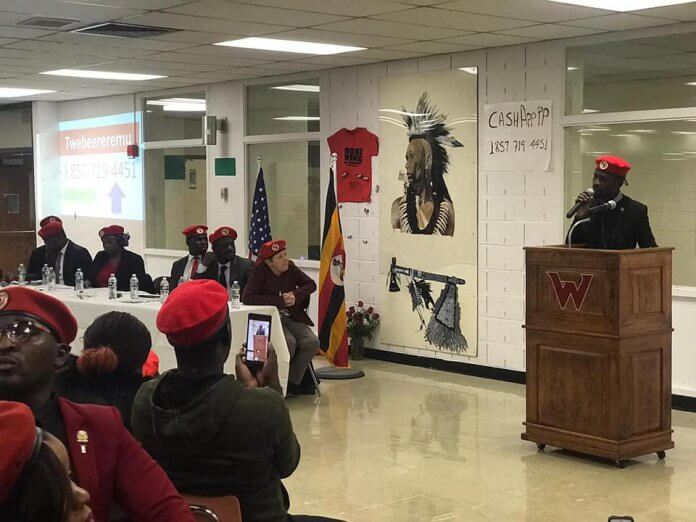 Bobi Wine, who is also the Kyadondo East legislator, is currently on a fundraising tour for his campaigns in the United States of America (USA), where he flew with his team last week and has since been collecting money from Ugandans in the Diaspora, plus his supporters in America.

Ms. McCarthy lauded Bobi Wine for having the courage to challenge the status quo.

“It begins with courageous people when there is an injustice that is what everyone is looking for in Uganda because democracy in that country is not so good. It is always said that absolute democracy works absolutely in many states and I can assure Mr. Wine that the USA will give you support,” she said.

In his speech, Bobi Wine said he was compelled to run against Mr. Museveni due to many injustices in the country such as poor education, bad health services, lack of rule of law and continued injustice.

“We are not going to international agencies and foreign governments for support but I will run to Ugandans in the diaspora to help fund the cause. This is the time to have locally funded election to remove dictator Museveni who has caused misery to our country,” he said.

McCarthy’s statement, the deputy executive director of the government Media Centre, Col. Shaban Bantariza, said such support is useless because Bobi Wine’s absolute support has to come from Uganda.

Bantariza said; “That is nonsense. Tell that mayor that Bobi Wine’s constituency is in Uganda. How can her comment affect the voters in Uganda who are going to choose their leaders? The USA should know that we don’t need their help whatsoever.”

To my brothers and sisters in the USA, What is a town hall meeting in political meaning? what are the elements of such a meeting? FDC Asked

FDC accuses Bobi wine of calling Besigye’s presidential campaigns a failure during his interview with US Based television known as CAMPFIRE.