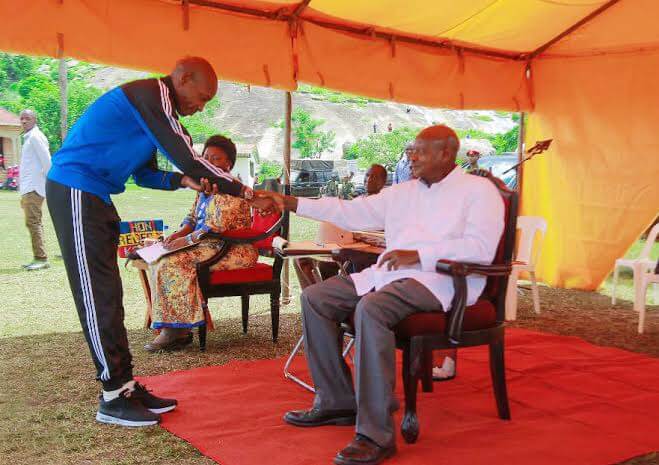 You all remember flamboyant socialite Brian Kirumira aka Bryan White, who used to splash money in ghettos under the guise of rehabilitating youth from drug abuse and criminality?

Well, we have stumbled on information indicating that Bryan White is no longer on good terms with President Yoweri Museveni and can no longer hobnob around with the President like he used to do some time back.

The reason for this is that he failed to conquer the ghettos and tame Kyadondo East Member of Parliament Robert Kyagulanyi aka Bobi  Wine’s power and influence among the ghetto people.

It should be recalled that when singer Moses Ssali aka Bebe Cool failed to tame Bobi Wine’s influence among the ghetto people, he seconded Bryan White as the only man who could do the job, because of having had a long history from the ghetto.

As such, Bebe Cool and Bryan White were reportedly heavily facilitated by State House to go to the ghetto and recruit as many youths as they could into National Resistance Movement (NRM) and make them denounce their allegiance and support for Bobi Wine.

Bryan White convinced Museveni that since the biggest problems youth are facing rotate around poverty, the quickest solution would be giving them money to start up income-generating projects.

As such, Bryan White started going to ghettos around Kampala holding public meetings at which he would dish out money to youth and women who confessed to having been criminals but had been reformed by the so-called Bryan White Foundation.

However, despite all his activities of dishing out money to youth, comedians and artists, it was not long before the President realized that the Bryan White-Bebe Cool project wasn’t bearing any fruits, because whereas he distributed money to youth and claimed to be preaching NRM gospel to them, they were instead exhibiting more support for Bobi Wine and his People Power pressure group.

Soon the cash taps at State House ran dry for Bryan White and his access to the Presidential residence became next to impossible because he had become irrelevant.

In the end, after being left with no other choices, Museveni decided to storm the ghettos himself, such that he would undertake to weaken Bobi’s influence among the ghetto people himself.

It should be noted that Museveni two weeks ago officially launched his ghetto campaign in Katwe, after he appointed singer Buchanan as Presidential Envoy on Ghetto Affairs and Catherine Kusasira as Presidential Advisor on Artists Affairs.