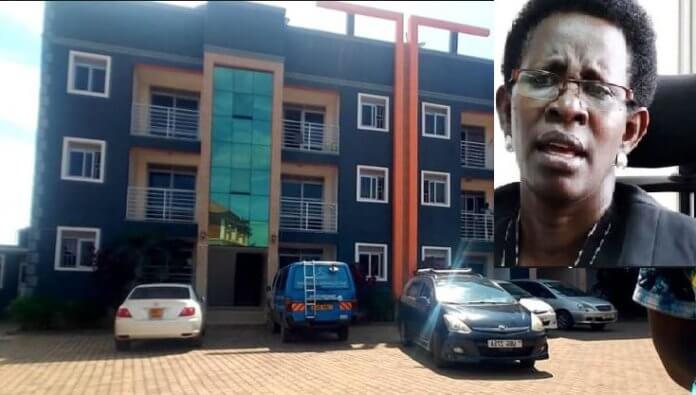 The Permanent Secretary to the Ministry of Health Dr. Diana Atwine might be swimming in during this COVID-19 crisis, at a time when several Ugandans are languishing in poverty.

This comes after our Spies intimated that whereas she has a busy schedule at the Ministry of coordinating the COVID-19 Task Force activities, she often takes off time to inspect construction works at two massive storeyed buildings in Najeera and Kulambiro,  both Kampala suburbs, which house over 10 apartments.

Our Spies in Najjera who often see her supervising the  progress of work at both buildings contend that the Doctor could be having special interests in the projects, because of the lengthy moment she spends there being briefed about every detail by the engineers.

As if the apartment blocks are not, we’ve also heard that Dr Atwine is also usually seen inspecting  two huge chunks of land Kulambiro and Kira Municipality, as if she is considering investment prospects for the same.

It should be recalled that Dr. Atwine and Ronald Ssegawa, the undersecretary Ministry of Health, were in November 2019 made to record statements with the Criminal Investigations Department (CID) of police over their alleged unlawful expenditure of Shs6 billion.

The two were handed over to CID by the Public Accounts Committee that was chaired by Okin Ojara.

The MPs were scrutinising the Auditor General’s reports for the 2016/2017 and 2017/2018 financial years, which queried the diversion of public resources by Ministry of Health officials.

According to Ojara, although Parliament allocates funds according to work plans presented by the respective ministries detailing how it would be spent, the Auditor General’s reports showed that Dr Atwine and Ssegawa disbursed money ignoring the purpose for which it was provided.

According to Ojara, the committee also investigated the possibility that the money in question could have been stolen.

The money was meant for among other projects; the rehabilitation and expansion of Kayunga Hospital that was supposed to get a paediatric surgery unit at Shs2.2 billion, although the officials denied the allegations.

However, it should be noted that by the time of filing this article, efforts to contact Dr Atwine for a comment about these allegations were still futile because she couldn’t be reached on her known mobile phone numbers.

But we shall keep you posted as soon as we get in touch with her. Watch this Space!