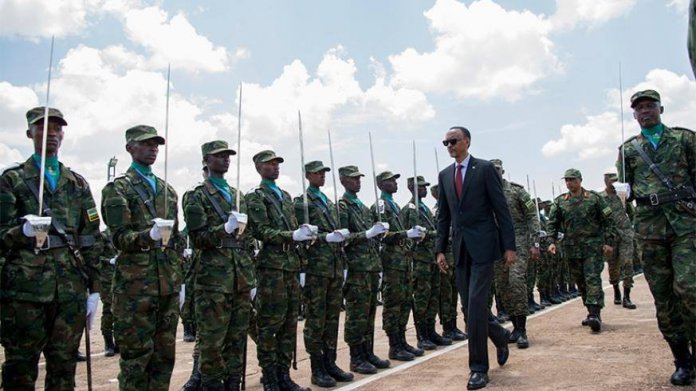 President Paul Kagame has said Rwanda’s armed services should be prepared to deal with any challenges in the region.

“We have to live well with our neighbours, respect each other, trade with each other,” said Kagame.

“Everything is not always straightforward, some people choose to get in the way of others. But you have been prepared to deal with these issues based on how they come to us,” he emphasised.

Kagame spoke Saturday at the commissioning of 320 new officers at the Rwanda Military Academy – Gako, in Bugesera District.

Kagame has in recent months sharpened criticism of neighboring countries especially Uganda which he accuses of harboring dissidents to remove him from power.

Kampala has since dismissed the accusations as false, reaffirming it’s commitment to good relations with Rwanda.

Rwanda maintains a blockade on Uganda goods and stopped its nationals from traveling to Uganda.

Kagame told the commissioned officers that “Peace is never a given, you have to work for it,” adding, “You have been prepared and I have no doubt that you will be able to live up to what is expected of you.”

He added: This is a job where you will never really have time off. But it is nothing to be afraid of. You are fortunate to be in a position where you have been trained. When you face challenges, you will be better prepared