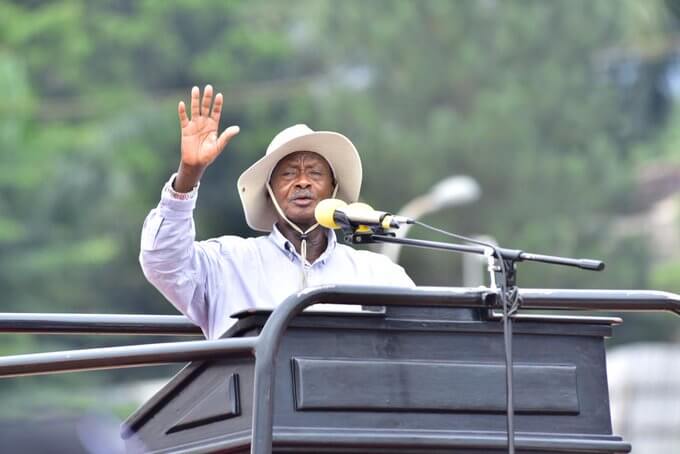 President Yoweri Museveni has revealed that the peace and stability that was brought by the National Resistance Movement (NRM) government has enabled artistes like Bobi wine, Bebe cool and Chameleone to nurture and develop their talents while making money to fight poverty.

President Yoweri Museveni made these remarks on Thursday during celebrations of Sam Bagenda aka Bbosa’s 33 years in acting.

The actor, who has dominated drama in Uganda under the Ebonies, commemorated his legacy with a 40-minute play, titled Under The Bed.

The play depicts lust in society. President Museveni, who arrived at 8:25 pm, said he was grateful to the Ebonies for inviting him to the theatre, which he said he last attended 55 years ago and had been missing.

“I used to be active in drama and the Scripture Union in school. I took part in a play of the murder of Julius Caesar in the cathedral,” he said.

He added that later, from 1965, he got involved in the political struggles and did not have time for anything else after that.

“Therefore, when I was sitting there watching, I said to myself that these people have been enjoying good things, I have missed,” he said.

Museveni described the play as full of fun and at the same time educative.

“But I have not had time to interact with the dramatists for a long time. Therefore, I thank you for inviting me today. But in particular, I thank you for utilizing the opportunities created by the National Resistance Movement Government to develop your talents,” he said.

Museveni quoted the Bible, about a man who was given a talent and utilized it well. He narrated that when they had just returned from the bush, he used to watch Uganda Television and enjoyed Ebonies’ drama series — That’s Life Mwattu — which featured Bagenda prominently.

“At that time, he (Bagenda) used to demean the people of Kiboga, describing them as backward and, therefore, did not know much about the city and urban life. That was the last time I saw him on television acting,” he stated.

President also said he was shocked to learn that Jimmy Katumba died. Bbosa knelt on stage and raised his hands high, thanking everyone who had shown him, love. He repeatedly said it was too much joy for him He quoted Simeon in the Bible, who said:

“Sovereign Lord, now let your servant die in peace, as you have President Museveni admires mugs which were donated by Dr. Bbosa during celebrations to mark Bbosa’s 33 years in drama at Theatre La Bonita in Kampala on Thursday. Photos by Eddie Ssejjoba Pastor Bugembe praying for Bbosa promised” (Luke 2:25).

“This is my day, but forgive me, because I am speechless. Let me keep quiet because I can weep in front of you,” he continued saying as his fans cheered him on.

Bbosa hailed President Museveni for having accepted to grace his day and thanked Wilson Bugembe, a gospel artist and pastor of Worship House, who he said prayed for him to host the President. Bugembe prayed for Bagenda and compared him (Bbosa) to the leper in the Bible, who returned to thank Jesus Christ after being healed.

The other lepers did not bother to return and give thanks. Bbosa donated two mugs to the President, one bearing Museveni’s picture and another, his wife, the First Lady. Museveni also promised The Ebonies a donation of sh100m