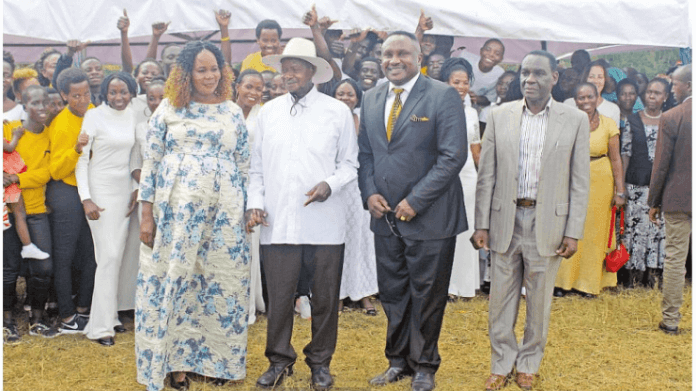 President Yoweri Museveni has called on members of the National Fellowship of the Pentecostal Churches of Uganda and wanainchi not to be parasites.

He made the call on Thursday at Kyenjojo Secondary School in Kyenjojo town, when he joined them in prayers.

“On Wednesday, we walked in Kampala to mark the fight against corruption. The corrupt people have got three characters. They are parasites. They do not fear God and they are lazy. They are stupid because they think that when nobody sees them, God does not see them. The stupid ones think that they are clever. The Bible says you reap what you sow. They have no useful role,” he said.

The main preacher at the fellowship was pastor Imelda Namutebi of the Kampala-based Liberty Worship Centre. The Kyenjojo Fellowship, which is running from November 24 to December 8, has had over 2,000 believers attending.

President Museveni noted that most of the criminals have been punished by God and that the Bible does not like or support lazy people. He reminded the congregation that the Bible clearly states that whoever does not work should not eat.

“If God made you healthy with good life, why don’t you use your talents to develop yourselves?” he asked.

“The testimony that I am giving you is part of my experiences and observations over the last 60 years as a mature person. I have not seen any thief who has got lasting wealth,” he added.

President Museveni told the fellowship that the National Resistance Movement wants whoever has land to cultivate and grow food and eradicate poverty from their homes. He called on the people to carry out calculations before embarking on any venture so that they generate income for their families.

Museveni also cautioned the congregation against land fragmentation, noting that when land is fragmented, people do not reap any plausible benefits from it. He commended pastor Namutebi for preaching the word of God.

Kyenjojo Woman MP Esperanza Baguma welcomed the President to Kyenjojo district, while pastor Namutebi applauded Museveni for freedom of worship and peace in the country and also thanked him for attending the crusade.