The people of Busoga have a new oracle to oversee the spirits of River Nile. Dhaadha Nabamba Budhagali comes from a remote village of Kiiga-Butayunjwa in Kidera sub-county, Buyende district.

The 33-year-old Hassan Yiga Kirunda was chosen by the spirits in a mysterious way that left other candidates, especially the Baswezi clique, who had hoped they would get possessed by the 350 spirits, dissatisfied.

They have already protested and want Kirunda’s installation halted. However, Mmandwa Kireeba Isabirye Iyingo, the oracle of Iyingo hill in Buyende district, said the process of selecting an oracle is not like an election, where losers petition the organizers.

“Spirits have their choice. You cannot simply protest just because you wished to become an oracle. Budhagali chose his successor and that is done,” he said.

Dhaadha Nabamba Bujagali died of natural causes on October 26 and was buried on November 3. It was unclear who would take over the mantle of the 350 spirits as the successor and the wait was full of eagerness and anxiety.

That is why the new Budhagali’s popularity is soaring every passing day. Crowds trek from morning to sundown, jostling to have a glance at the young man who scooped the prestigious title in the Misambwa fraternity in Busoga. Kirunda becomes the 40th Nabamba Budhagali of the once-mighty waterfalls.

How the new Budhagali was chosen

The selection of the new Budhagali was mysterious. Kirunda vanished from his bathroom, where his wife had taken a basin of water for him to bathe. Monica Nakisekka, 33, told Ugandanz that she waited for him to return in vain.

He was later sighted seated on a lonely Island of Budhagali in the Nile, where the spirits take and keep the proposed successors of the fallen Budhagali. While there, he did not have any meals or any drinks for seven days.

He remained on the ice-cold rocks and serpent- infested waters and weeds. It is said that he never eased himself during the seven days. The possessed Kirunda returned on the eighth day amid frenzy Kiswezi drumming and singing. The deafening drumming, flute and calabash trumpets went crazy as he appeared.

The Baswezi then showcased their entertainment antics of dancing while holding sharp knives and daggers without injuring themselves. Busoga spirits select 33-year-old as newBudhagali The next qualification huddle for Kirunda is not to have sexual intercourse for the next four years. 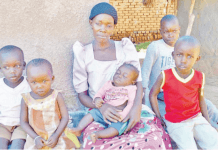 Wife of New Budhagali worried about Her Future