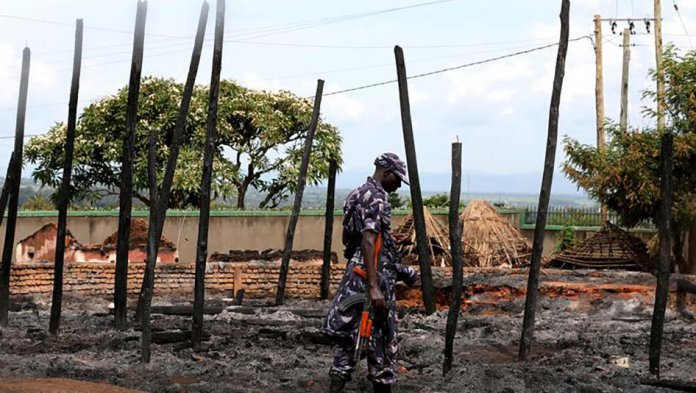 It is three years since joint security forces raided the palace of Omusinga Charles Wesely Mumbere of Rwenzururu.

The palace is located on Kijongo Road in the upscale suburb of Kasese municipality, locally known as Muyenga.

The raid, in which about 1000 people, including 16 policemen died, left lasting memories on the people of Kasese. Aida Loy Syauswa, whose gate was destroyed by an explosive, wants the conflict to be resolved amicably.

“We, the women in the region, are tired and do not want another conflict. We want to settle and work for our children, to make sure they get an education in a peaceful country,” Syauswa said.

She blamed the suffering of women and children in the Rwenzori sub-region on the trigger-happy men.

“When we search for the reasons why we suffer, we do not get the answers,” Syauswa said. “Can’t we let peace prevail in our area like the case is in other districts? For how long shall we go on like this? We are tired,” she said.

Syauswa’s sentiments are shared by many people who have been affected by the vicious cycle of conflicts in the Rwenzori sub-region. Since independence, the sub-region has borne the brunt of numerous conflicts that have meted untold suffering on the community.

The Speaker of Parliament, Ms. Rebecca Kadaga, yesterday directed the Committee on Defence and Internal Affairs to present a report of its probe into the killings in November 2016 when the army raided the palace of Rwenzururu King Charles Wesley Mumbere in Kasese District.

The directive came after Kasese District Woman Member of Parliament, Ms. Winfred Kiiza, asked whether Parliament was proceeding properly without a report being presented three years after the attacks.

“Last year, we raised the same procedural matter, the chairperson of the committee said she was ready to present the report to the House. She pleaded with the sitting Speaker then that she only needed time to be put on the Order Paper, and she presents the report,” Ms. Kiiza submitted.

She wondered why the Committee would not ask for additional time if the report was not ready last year.

“I ask whether it is not procedurally incorrect that a matter that came three years ago, can’t be handled by this House. Otherwise, the people of Kasese, Bundibugyo, and Ntoroko may end up thinking that it is this House sitting on that report,” she added.

The Speaker, who did not open any debate about the matter, directed the Committee chaired by Ms. Doreen Amule (Amolatar District Woman MP, NRM) to make the report available so that it is discussed by the House.

“We have over 200 prisoners, including about 20 women.” He said eight of the inmates died in prison since their arrest in 2016.

“Our king enjoyed very cordial relations with President Yoweri Museveni, which was a golden chance for our prosperity. We lost that chance. Some people now talk ill of Kasese. They portray us as hostile, panga-wielding people.” Mbayahi says the conflict also exposed people who had been sowing confusion in the community.

Referring to the royal family, Mbayahi said: “They have never united.”

For the Rwenzururu veterans, he said: “They have never respected the current kingdom caretakers.”

Mbayahi also said the Forum for Democratic Change hardliners do not respect his committee administration.

He said some members of the National Resistance Movement (NRM) do not wish the kingdom well.

He said they had beefed up security in the region by establishing the mountain division in Rwenzori to counter possible attacks from the ADF.

Mbayahi, however, says despite the negative image, efforts are underway to rebrand the institution through initiatives such as Kasese Think Tank.

“Although we lost our loved ones, we want to use their deaths as a lesson to avoid past mistakes.”

Emphasizing the need for reconciliation, Mbayahi, who is a primary school teacher, urged residents to respect the kingdom administration and work as a team.

A woman marries ‘Three Husband’, scuffle as clan tries to chase away her husbands