Home National News Kaka woes deepens as his houses are to be searched for Two... 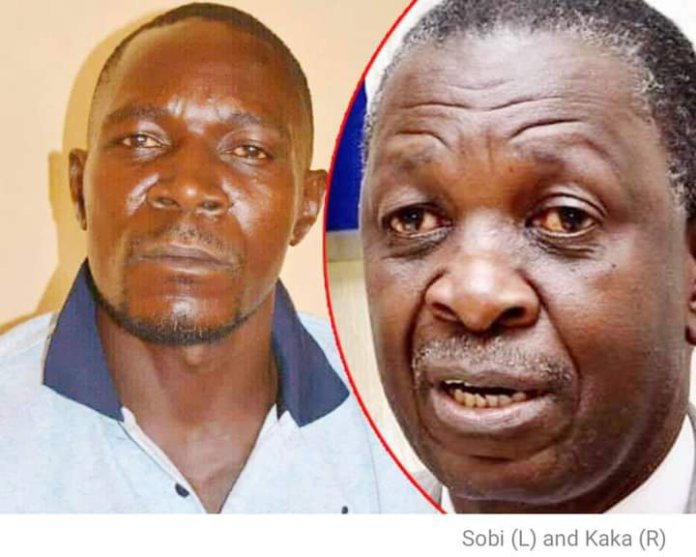 An Order to search Kaka’s Home for two criminals using it as safe heaven is issued.

I can confirm with certainty that an order to search Kaka Badyenda’s known residences has been issued.

Security is trying to recover the high value criminal known by his trade names as Kaberenge. A confidential source has confirmed that indeed his Excellency the President and Commander in Chief of the Armed forces put no objection to any investigations into crimes committed by Kaka and his agents. It has become a normal thing for Security to investigate abuse of authority by security chiefs.

Kaberenge a former certified criminal was made in-charge of arrests by Kaka Bagyenda despite his previous criminal record, he made it a habit to torture his suspects to near death before dumping them at various safe houses for official handling which included treatment.

The new regime at ISO has already dismissed the group of thugs that were hired by Kaka, CMI has so far arrested half the group that had been operating under the cover of Kaka, all of these armed by Kaka have now been disarmed.

One of them confessed how they use to run operations; ” We Sobi could call Kaka and inform his boss of a robbery, after an hour Junior and Lukwamuzi also gives slightly similar information and this time give names of a suspect, the last call would come from Kaberenge giving the same information with suspect and location, kaka would then release operational funds to pick a suspect not knowing that the four had planned this already and they already have this suspect in their safe house. After they receive two million shillings they then deliver the suspect at a safe house.” confesses kaka’s boys. He further says this used to happen to fake suspect who had no money

Using people with a criminal records as security operative is so dangerous, it has proved troublesome in Uganda, one of the requirement into police or army is for a candidate to have a clean record, how then do they end up with guns? Thugs have a criminal mind they will use this opportunity to better their skill or even legitimize their activities when give the opportunity to join ISO, they will simply upgrade to supervises of crime/crime tax collectors. This caused problems for Kayihura and now Kaka, security operatives in Uganda are not paid that good therefore thugs can’t drop their well-paying past.

The only exception is if these criminals are used as informer to inform security personnel on possible crimes.

Ideally, ISO shouldn’t arrest and detail suspects, they can work together with Police, by providing Police with intelligence information for police to investigate and arrest but the love for extortion money made it necessary for Kaka to arrest and hold innocent Ugandans citizens for as long as two years.

Under Ugandan Laws, you are innocent until proved guilty in courts of law, the principle of presumption of innocence is a key in Human Rights, Kaka had no prosecuting powers, he made it a point to Hate CID chief Akullo, CMI heads and other police heads.

Kaka made it a point to arrest or sideline any employee of ISO seen coordinating with other security agencies, let on one tell you that Kaka improved the security situation in Uganda, ask whoever says that to give you a record of prosecutions and convictions the resulted to Kaka’s operations.

Security was improved after the appointment of Sabiiti, it’s was the coordination of Sabiiti and CMI that led to the arrest and prosecution of all thugs that operated under Kayihura, this proved that what was reported on this wall about Kayihura involvement in crime was true, as soon as he was arrested with his group everything ended, criminals went into hiding, some went to Kaka for safety.

Kaka was a total intelligence failure, the new regime has nothing good to pick from Kaka, we have hope that Lt.Col Oluka will perform, he is hands-on, has been in the business and willing to setup a team of career professionals in intelligence collection.

Lt. Col. Oluka has already held meetings with staff members trying to get them motivated, he has a huge bill left behind by Kaka but information from ISO indicate that he has put the finance team to task to ensure every supply is reevaluate and paid before December.

Meanwhile CMI and SFC are doing the needful picking whoever was involved in crime with the protection of Kaka.