Teddy Naluswa, the wife of House of Prayer Ministries’ pastor Aloysius Bugingo, says her estranged husband has refused to pay tuition and school fees for the children.

She says as the semester and school term kicks off, her prayer is that the court forces Bugingo to pay fees for all their kids.

She says when the children went to her husband’s office over the matter, the pastor sent them away and said he would not pay their school fees.

According to Teddy’s lawyer, Julius Galisonga, Treasure is a student of electronic engineering in the UK, Jennifer is doing business administration at Makerere University Business School, while Isaac Miracle is in baby class.

Galisonga said filling an application for maintenance in court was the last resort after efforts to convince Bugingo to pay tuition for his own children failed.

“I did not want to le the application to avoid publicity, which is why I called Bugingo’s lawyer to talk to him, but it was all in vain,” Galisonga said.

According to Justice Remmy Kasule, if a parent fails to pay school fees, yet he has the ability to do so, a child above 18 years can use the law to ensure their needs are met.

And as a result, the court will force Bugingo to pay school fees and other necessities wanted by the children he fathered

“Overriding consideration is not the age, but the court looks at the circumstances. For example, if the parent has the means to pay university fees and he refuses to give support, the court makes orders and takes the necessary action,” he said.

The Court of Appeal justice said a person who clocks 18 years is an adult and has a right to go to court to ask maintenance orders because it is a parent’s legal obligation to provide for their welfare, development, and wellbeing.

“For example, if I am 18 years old and pursuing studies, I still remain under the care of my parents until I start earning a living to sustain myself. Being 18 years old does not disqualify me from getting support from my parents,” he explained.

He said under Ugandan and traditional laws, it is only after you have acquired the necessary skills and are capable of sustaining yourself that you can leave a parent’s home.

“It is still the responsibility of parents to support children who are pursuing education,” he said. Kasule said children should not be punished because of their parents’ misunderstandings.

Galisonga said Entebbe court chief magistrate Mary Babirye directed Teddy, Bugingo and the lawyers to appear in court on August 23, but Bugingo and his lawyer never turned up.

On Wednesday, Bugingo called a press conference in Kampala where he argued that his estranged wife receives sh400,000 weekly for buying fuel for the vehicles which are used to take children to school and another sh400,000 every week for home use. 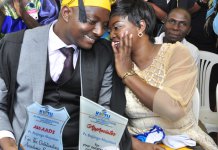