The Government plans to deploy eight planes for aerial spraying to kill the desert locusts in case they invade Uganda as has been predicted.

The Prime Minister, Dr. Ruhakana Rugunda, said four of the planes will come from the Desert Locust Control Organisation for Eastern Africa (DLCO-EA) and the Government will provide funds to service the planes, buy fuel and chemicals.

Rugunda also said a team of 2,000 soldiers, as well as 1,000 policemen and 400 extension workers, have been mobilized to stem the locust invasion.

The team will be deployed in parts of northeastern Uganda, Teso, Bugisu, and Kitgum that are currently facing the risk of invasion.

This will be done after training. The 1,000 policemen have already benefited from previous training in disaster management.

Rugunda made the revelations during a press briefing at the Office of the President in Kampala, which was attended by ministers and technical officers.

Rugunda said by October last year, the desert locusts were in parts of Ethiopia, Eritrea, Somalia, and Sudan, where their numbers grew.

They invaded the northeastern part of Kenya on December 28 and have spread in four swarms into 10 counties.

Sempijja said the locusts are heading towards Uganda in two swarms the one of Baringo and another moving through Samburu, which has reached Turkana County in Kenya village wells.

The locusts are now about 300km away from Karamoja, in the northeastern part of the country. Locusts can cover as much as 150km a day and an average swarm will destroy crops sufficient to feed 2,500 people for a year, according to the UN.

Rugunda did not mention the amount of money that is needed to fight the locust invasion, although the agriculture ministry estimated sh5b. He said the Government considers the fight against the locusts a priority.

Kasaija said the invasion of the locusts would be an attack on the livelihoods of Ugandans and a setback to the economy. He said he was going to mobilize funding to support the Government’s strategies to fight the invasion.

Ssempijja said aerial spraying and hand spraying will be encouraged, but precautions will be taken to safeguard the human population as well as that the available food should be used sparingly because the locust invasion is likely to be followed by food shortage. 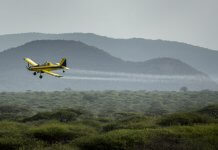 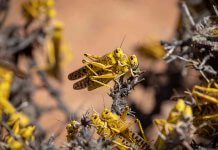 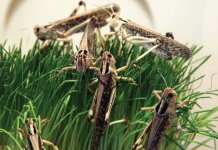