Home Politics Details: How & Why Tumukunde fell out of Museveni’s Grace 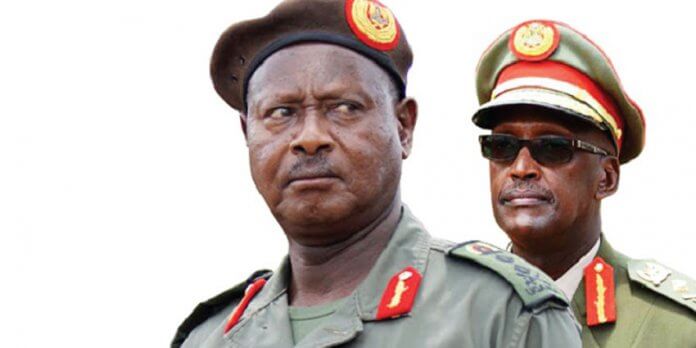 Former security minister, Lt. Gen. Henry Tumukunde has explained the core of his disagreement with President Yoweri Museveni that has prompted him to consider joining the presidential race.

He says his decision has been due to Museveni’s failure to organise Uganda for a peaceful transition of power.

“My fundamental difference with him is that at a certain point of our struggle, we expected him to structure Uganda, organise Uganda, direct Uganda in a way that delivers us to a peaceful transition because it promises continuity, peace and tranquillity and it also allows us to move forward and change leaders,” said Tumukunde, one of the NRA bush war heroes.

Tumukunde, who has served in various capacities in security agencies, including heading the Internal Security Organisation and Chieftaincy of Military Intelligence, this week wrote to the Electoral Commission (EC), notifying it of his plan to carry out consultative meetings as he considers standing as a presidential candidate in next year.

The letter to the EC chairperson highlighted that his bid is aimed at supporting, “the fundamental change we promised Ugandans in the past, and a peaceful transition, from one generation to another”.

In a television interview yesterday, Tumukunde also outlined economic disparity, the high administrative costs, unemployment, absence of national priorities, the breakdown in the security intelligence system and lack of political space to voice divergent views as other underlying factors that have prompted him to join the presidential race. Tumukunde featured on an early morning talk show on NBS television.

The jovial and witty Tumukunde argued that although he is opposed to Museveni’s leadership, he is not out to personally fight him. He took a swipe at opposition politicians that threaten Museveni’s personal security once he leaves office.

He warned that these politicians undermine a peaceful transition of power. He cited opposition leaders that have threatened to drag Museveni to the International Criminal Court (ICC).

“Don’t threaten people’s personal lives and you think you are actually directing change. Give him hope that if he left that office, he would be respected. I want to be on the record, I would respect President Museveni, if for nothing, at least for the 18 hours he spends when working for the republic… But you are taking him on as an individual and I am taking on an office called the presidency,” Tumukunde said.

He further scoffed at his critics who have labelled him ‘mole’, saying they are either unknowingly or consciously aiding the regime’s longevity. Tumukunde becomes the highest Uganda People’s Defence Forces (UPDF) general to declare his aspiration to become president.

The others that have faced off with their former boss are Maj. Gen. Benon Biraaro (deceased), who contested as an independent candidate in 2016 alongside Col. Kizza Besigye and Amama Mbabazi, who both formerly held senior political or security positions in the ruling NRM administration.

Tumukunde, 61, served as head of the Internal Security Organisation (ISO), the Chieftaincy of Military Intelligence (CMI), and commander of the UPDF’s 4th Division. Although the Opposition in Uganda has since 1996 elections failed to front a joint candidate, Tumukunde was optimistic that in 2021, a united opposition front will work.

“Those talking against the chance for unity, I told you, belong to the payroll part… Their job is to always say it’s not possible, oyo tasobola, (that one can’t)… Man man man, we are going to give it time and for us, we shall use every method. If we go here and it doesn’t work, then we go down,” he said.

Citing fallen leaders like Omar Bashir of Sudan, Hosni Mubarak of Egypt and Hastings Kamuzu Banda of Malawi, Tumukunde said that once the citizenry is mobilised, it is possible for a strongman to be ousted.

“Even apartheid in South Africa was defeated but what almost killed the struggle was something called moles, everyone became a mole. When you have the struggle to undertake, if you start regarding everyone as a mole, you never grow enough critical mass to actually oust a government. Can you imagine when Nelson Mandela decided to talk to De Klerk, they almost labelled him a mole?” said Tumukunde and he went on to say that he would have no problem attending a wedding at Museveni’s home.

On his relationship with former inspector general of Police Gen. Kale Kayihura, however, Tumukunde said that he holds nothing personal against him. He dismissed the view that Mbabazi and Gen. David Ssejjusa have since returned to the NRM fold, given that they are keeping a low profile.

He expressed sympathy for Sejusa, saying he was supposed to be retired from UPDF last year, but his name was struck off the list at the last minute. Tumukunde is one of the NRA bush war heroes.

He served as head of the Internal Security Organisation, the Chieftaincy of Military Intelligence and commander of UPDF 4th Division Tumukunde campaigning for President Museveni during the 2016 campaign in Nebbi 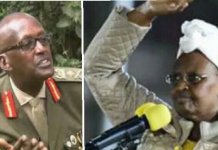