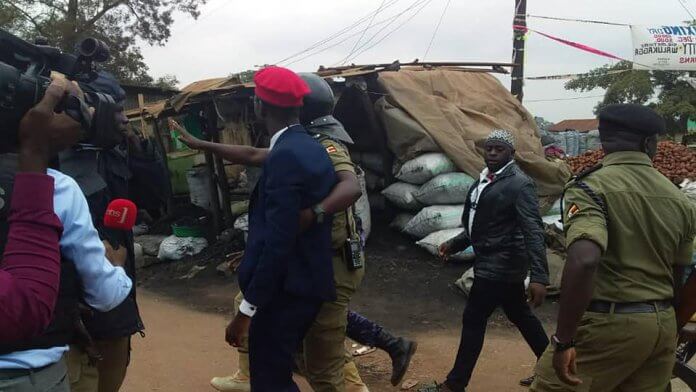 Bobi Wine, his lawyers and several People Power supporters arrested at Kasangati on their way to Gayaza for their first consultation meeting.

Teargas, bullets rocked Kasangati as police blocks Bobi Wine from accessing the venue where he was scheduled to hold his first consultation meeting

Hon Latif Sebaggala was also brutally arrested as he was heading for the consultations with Hon. Bobi wine in kalanagala. His location is unknown for now!

While commenting on the brutal arrest People Power Spokesperson Joel Ssenyonyi said: ” While Mr. Museveni is walking and going around the country, he doesn’t want the rest of us to interact with Ugandans.”

“With Honourable Kyagulanyi and other leaders inside one of the police cells at Kasangati Police Station. I managed to sneak my phone in. Other comrades are in other cells, and we understand some other people have been injured.”

He further said that the police are playing a witch hunt because they had followed every regulation given yo them by the police force.

“We observed the law and followed everything the authorities asked us to fulfill our consultations to happen. While Mr. Museveni is walking and going around the country, he doesn’t want the rest of us to interact with Ugandans.”

“Nonetheless, as Ugandans, we shall not tire in our quest for change, because nothing can stop an idea whose time has come!”