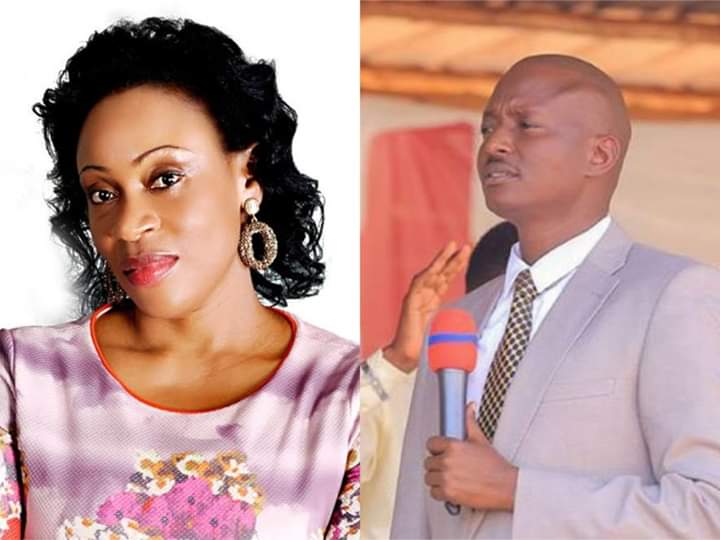 Teddy Naluswa Bugingo has said Pastor Aloysius Bugingo wants to divorce her and marry one of his employees, Suzan Makula Nantaba. It took patience, conniving and under the bed tactics for Nantaba to make the pastor hate and dump his wife for her.

Like a ninja, she stealthily crawled into Bugingo’s bedroom, what started as a work-related conversation between Bugingo and Suzan has now turned the pastor’s marriage into a public debate. In a telltale interview with weekly tabloid­ ‘The Kampala Sun’, Bugingo’s daughter, Doreen, narrates that Suzan started as a mere co-worker with the Bugingos.

It started when the two were working at Impact and Alpha radio stations. –by then, Bugingo was still under the wing of Pastor Joseph Sserwadda, now his target of hate. ‑ That was 16 years ago. When Bugingo fell out with Serwadda, he formed his own Salt Media Empire.

Seven months into operations, he recruited Suzan, along with  ve other prominent personalities, a trek that left Impact and Alpha struggling. Bugingo, according to Doreen, made Suzan a boss. All power was centered on her as she was in charge of recruitment/retrenchment of workers, programming for the media, spearheading decision-making and policies, among others.

“Suzan also hosts a music show on Salt FM on Saturday that airs for four hours and for the past two years, the pastor has always been with her in the studio. However, he is never heard on air,” says the source.

For a while, Suzan played coy and stealthily wormed her way into Bugingo’s family.

“She was our family friend,” says Doreen.

She became a close friend of Teddy and Doreen. She was their run-to person. She was that friend at hand during functions at home, the one who would mop the sitting room before visitors arrive while the maid is still busy chopping onions.

Suzan was the one who would dust the shelves, the one who always found the misplaced small charger in the house. She who cooks the breakfast in bed, which made her end up in the bed. Could Suzan have simply done that? The level of trust was so high they probably sent her to the master bedroom for make-up.

And while helping at the home, she did not only provide company to the women in the house, but also the main man.

Suzan probably raised her butt and wiggled while mopping, and Bugingo stood on alert. She probably sashayed while going to the kitchen to pick a clean fork, and Bugingo’s eyes remained glued. It is probable that it is then that the pastor noticed that he could not just have her as another ‘wife’ (side dish), but as a replacement for Teddy.

Based on the symbiotic relationship that existed, Suzan went as far as getting informed about family issues that could not even be disclosed to either the family’s relatives, friends or church elders. She did not only get involved in home a­ffairs, she also became quite involved in the church.