screening at its border points with the Democratic Republic of Congo as more Congolese refugees flock into Uganda to flee from poll-related violence. Joint health surveillance teams stepped up mandatory screening at Uganda’s border points in Bunagana in Kisoro district and Mpondwe in Kasese district.

The intense screening exercise comes hardly a week after the World Health Organisation (WHO) warned that growing unrest in eastern Congo was disrupting efforts to rein in an Ebola outbreak. Hampering efforts WHO director general Tedros Adhanom Ghebreyesus said in a statement on Friday that the security situation in Ebola hit Beni and Butembo was complicating efforts to fight the virus.

His warning came a day after protests erupted following the announcement of further delays in the DRC election in some regions. According to WHO, at least 20 people suspected of having contracted Ebola, fled a transit center in Beni, where elections were postponed due to the Ebola outbreak.

The global health body and its partners are monitoring the Ebola outbreak in the North Kivu and Ituri provinces and conducting vaccinations and tracking down suspected cases. WHO has warned that the disease, which has already claimed over 350 lives, could spread to other major towns in the region, such as Goma and Kisangani and even neighboring Uganda

Elections have proceeded in the rest of the country as scheduled and the next president is expected to be sworn in on January 18. High alert Emmanuel Ainebyoona, the health ministry’s senior public relations officer, told Ugandanz yesterday that teams from the ministry and partners were on high alert to prevent infection.

“We intensified our surveillance, which included sensitizing, active case search and communication to help identify anyone with the symptoms. No case of Ebola has been confirmed so far,” he said.

Spread and transmission The Ebola virus is transmitted through blood, secretions, organs or other bodily fluids of infected animals, such as chimpanzees, gorillas, fruit bats, monkeys, forest antelopes and porcupines.

A person suffering from Ebola can infect other people through physical contact with body fl uids, such as saliva, blood, stool, vomit, urine and sweat from an infected person and soiled clothing. Persons infected with the Ebola virus present with a sudden onset of fever, fatigue, muscle pain, headache, sore throat, vomiting, diarrhea, rash or bleeding from body openings.

Contact with fruit bats or monkeys or apes and consumption of their meat is discouraged, as well as direct or close contact with people with Ebola symptoms. The health ministry advises people who visit hospitals to wash hands with water and soap, report suspicious cases to the nearest health facility or call toll-free number 0800100066. 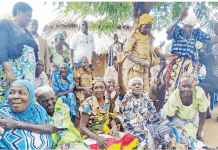