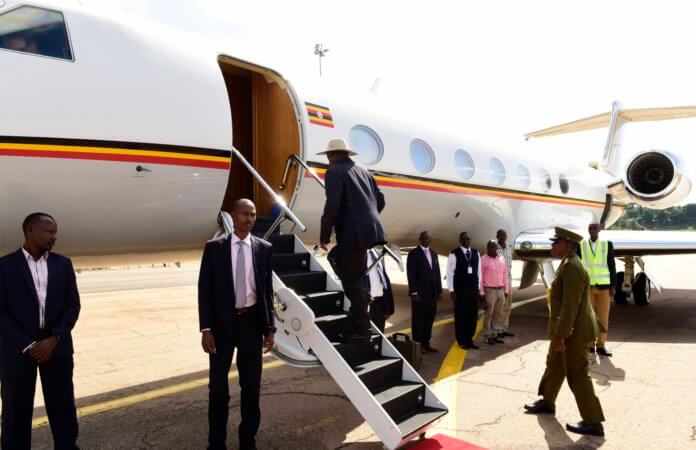 President Yoweri Kaguta Museveni’s special jet that cost over Shs88.2Bn has been abandoned by the head of the state after realizing that it had developed mechanical complications and was quickly becoming an aircraft in Dangerous Mechanical Condition (DMC), hence not airworthy.

This Website has learned that the Gulfstream V jet No. N908GA 52008 which, was purchased at the end of 2007 and landed in Uganda in January 2008, is currently out of use for official presidential flights and the President’s minders could be shopping around for a new jet as you read this.

According to our impeccable sources at StateHouse Entebbe, H.E Museveni recently ordered his air defense experts to immediately fly the Jet to the USA for servicing and repair in order to rectify all tear, wear and replace its faulty parts.

“Mzee is currently not using his Presidential Jet because it’s not in good mechanical condition, hence not fit for flights. Thus State House has adhered to his orders of getting repaired and as such technocrats flew it to the USA for servicing which will last for almost a month,” an informat revealed.

Gen. Museveni is one of the few world leaders who do not risk their lives at all. After receiving information about how a lot of planes have been developing mechanical problems amidst flights and claiming passengers’ lives, he thus requested his jet be serviced to equal international standards for safe flights.

Recently, the world has faced a lot of aircraft accidents which most of them resulted in deaths. The latest incident is that of a Uganda Peoples Defence Air Force chopper which crashed early this year in Gomba district, killing UPDF officers Maj. Naome Karungi and Lt. Benon Wakalo. There was also an Ethiopian aircraft Flight No. 302 Boeing 737 Max 8, which crashed last year, killing all 157 people who were aboard, plus the recent plane crash in Iran which killed over 176 people, who included passengers and the crew.

Gen. Museveni has been using this Gulfstream V jet for over 10 years and on some occasions, experts have been servicing it in Russia, America, France or Germany.

At the time he abandoned it, opposition Members of Parliament were protesting against the government plans to spend a whooping Shs88Bn to buy a new Presidential Jet, yet the old jet was still functioning properly and needed a little service.

But the President’s team argued that the new plane would consume less fuel and would be cheaper to repair.