Home Life Style Museveni: “With Buchaman on my side, Bobi Wine is finished Kabisa!”

President Museveni has finally spoken out why he appointed faded ragga artiste, Buchaman, as a special envoy in charge of the Ghetto.

While speaking to team of NRM mobilisers shortly after making the appointment, Museveni said Buchaman will help him butcher Bobi Wine politically because he knows the ins and outs of the Kyadondo East legislator.

“Bobi Wine is finished now because we have got his master planner. It is Buchaman who helped Bobi Wine to penetrate the Ghettos,”Museveni said as he whistled in excitement.

He said he will sit down with Buchaman and come up with a comprehensive strategy of how to reclaim the Ghettos from Bobi Wine.

“Even if it means getting the Ghetto youths some nani…so that they get excited, we shall get it for them,” Museveni added.

Museveni also promised to fund Buchaman heavily such that he ably neutralises Bobi Wine in every aspect.

Currently, Buchaman is chasing his official letter of appointment that will enable him get on the payroll.

He has been told that Museveni’s verbal appointment is not enough.

Buchaman served as vice president in the Ghetto Republic which was led by Bobi Wine.

The two later fell out and their lives took different twists and turns.

Bobi Wine decided to delve into politics where he has become an instant hit. As leader of People Power, Bobi Wine commands a large following of the youth. He has also indicated that he will run for president in 2021.

On his part, Buchaman fell on hard times after parting ways with Bobi Wine.

He literally became a beggar and many artistes tried to avoid crossing paths with him.

He tried several times to re-invent his music career but nothing came of it.

However the turning point was the Kyadondo East by-elections which Buchaman used to try to get one over his former boss.

Buchaman feverishly campaigned against Bobi Wine, saying electing him would be a big blunder.

It appears that this was the first test for Buchaman from Museveni. If Buchaman was willing to stab his former boss in the back during the parliamentary campaigns, then he could be deployed to thwart his presidential ambitions.

On Saturday, Museveni eventually appointed Buchaman into a special envoy role, a sign that he had passed the test. 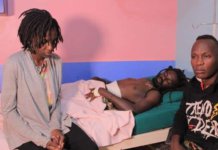 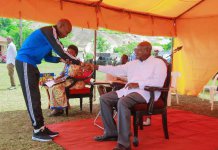 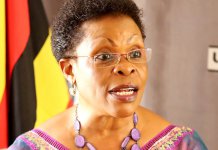