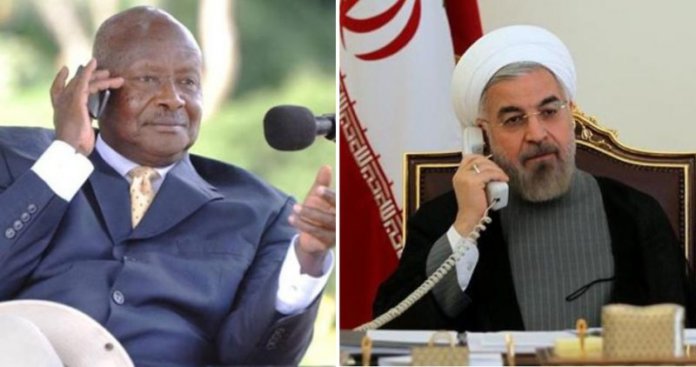 The two leaders according to the Iranian Embassy in Uganda, discussed a wide range of issues including possible cooperation in the fight against Civid19, which maintains a tight grip on the global population.

“They talked about enhancing bilateral ties and cooperation to fight Covid19 and priority of peaceful coexistence,” the Embassy said in a statement.

Iranian was among the most devastated countries by Covid19 during its outbreak in February and March.

Currently the West Asian country is the 8th most affected by the Coronavirus, with over 84000 cases.

Uganda on the other hand,  managed to contain the spike in new cases in late March and currently has 61 cases and 38 full recoveries.

Meanwhile, the two leaders also discussed what the embassy termed as the “US illegal pressures on Iranian people.”

The United States under President Trump since 2018 has maintained strict economic sanctions on Iran, some of which have been blamed for Iran’s struggle to contain Covid19.

In late March, just as the virus had claimed over 2000 Iranians, the US slapped a fresh round of sanctions targeting more than a dozen Iranian individuals and five companies.

This increased economic pressure by the US has been condemned globally by nations and international bodies including the Human Rights Watch.

While Trump has declined to ease the sanctions, countries in the European Union including France, UK and Germany have decided to go around the sanctions to provide relief to Iran