The embattled Imam of a mosque in Kayunga district who wedded a fellow man was yesterday charged in court with committing unnatural offences.

Sheikh Mohamed Mutumba of Kyampisi Masigid Noor mosque appeared before the Kayunga Grade One Magistrate Irene Akello, who read charges of unnatural offences to him and was sent on remand to Ntenjeru Prison.

Prosecution led by Moses Basomi alleged that Mutumba committed the offence together with Richard Tumushabe alias Swabullah Nabukeera, 19, whom he had wedded as his ‘wife ‘between December and January.

He was charged with having carnal knowledge of a person against the order of nature under the unnatural offences in section 145 (a) of the Penal Code Act.

The offence can lead to Kayunga Imam charged over wedding fellow man imprisonment for life.

Carnal knowledge is sexual intercourse in which there is a degree of penetration.

Sheikh Mutumba, 26, who nearly broke into tears in court, was not allowed to take a plea since the nature of the case he is facing can only be handled by the Chief Magistrate.

Tumushabe was charged with the same offence as well as theft on Tuesday and sent on remand in the same prison.

The two will reappear before the court on Friday, next week. Akello advised Mutumba to apply for bail the next time he reappears in court before the Chief Magistrate. 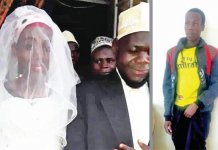