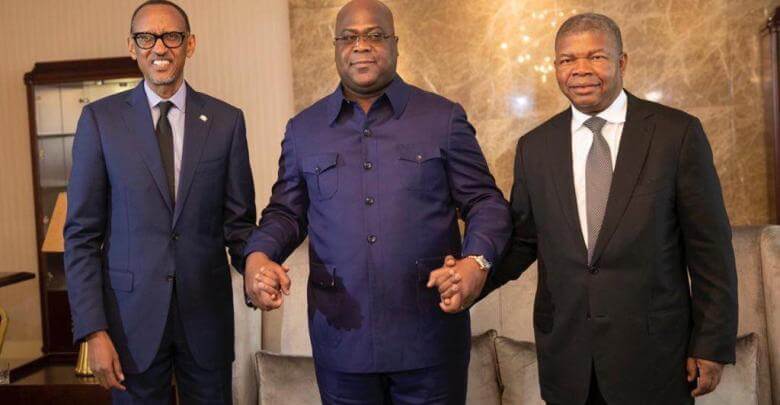 Presidents of Rwanda, Angola and the Democratic Republic of Congo met on Friday met in Kinshasa to discuss regional security.

The tripartite meeting focused “on restoring regional security and enhancing economic cooperation,” according to the Rwanda Presidency.

The meeting comes at a time President Kagame is looking for market for Rwandan goods following tense relations with Uganda and a security ally in case attacked by Uganda for her continuous provocations.

While on a recent countryside tour, Kagame urged locals to increase trade with the neighboring DRC.

Lourenco, the former defence minister who took over from Angolan strongman Dos Santos, is keen on strengthening ties with DRC, a vital strategic ally.

An estimated 35,000 people who fled from the central DRC’s Kasai Province, following a spike in volence, have reportedly been living in Angola since 2017.

There have been reports of Angolan forces entering DRC territory to pursue militants.

Tshisekedi’s first foreign destination as president was Angola where he met Lourenco. He would later travel to Kigali, Rwanda for the Transform Africa Summit.

Kagame, who also is uncomfortable with rebels operating from South Kivu allegedly being backed by Uganda, recently dispatched Chief of Defence Staff Gen Patrick Nyamvumba to meet with Tshisekedi to deepen military cooperation between the two countries.

“We have come to honor Félix Tshisekedi, laud his willingness to promote military cooperation and convey greetings from the President of the Republic of Rwanda,” said Nyamvumba after meeting the president at his office.

Strong ties between Kagame and Tshisekedi are likely to see both countries joining hands to fight rebel movements in DRC.