There was heavy police deployment at his residence in Magere in Kasangati Town Council in Wakiso district and his Busabala based One Love beach purportedly to stop from ‘committing crimes’.

The singer turned politician allegedly left his house unnoticed by police to go to his One Love beach in Busabala where his “Osobola” concert was supposed to be but he was intercepted by police before he reached his destination.

Bobi wine drops new killer Album, Here is what you need to know 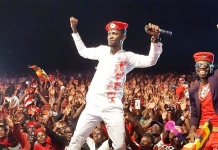