Sudan’s President Omar al-Bashir has stepped down and consultations are under way to set up a transitional council to run the country, government sources and a provincial minister said on Thursday.

The minister of production and economic resources in North Darfur Adel Mahjoub Hussein told the Dubai-based al-Hadath TV that “there are consultations to form a military council to take over power after President Bashir stepped down”.

Sudan’s army deployed troops around the defense ministry, while soldiers and security agency personnel were deployed on key roads and bridges in Khartoum early on Thursday.

Thousands of people flocked to an anti-government protest outside the ministry, a Reuters witness said.

More people joined the sit-in outside the ministry in central Khartoum, where protesters chanted: “It has fallen, we won.” 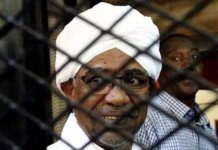 SHOCKING!!! How Museveni Yoseri Kayibanda, a.k.a Rutabasirwa escaped from Rwanda to Uganda