The Chief Justice, Bart Katureebe and the chairperson of the Uganda Human Rights Commission (UHRC), Meddie Kaggwa, have called for an end to human rights violations which negatively impact on the image of the country.

Presiding over at the national celebrations to mark the Universal Declaration of Human Rights Day at Railway grounds in Kampala yesterday, Katureebe expressed concern that cases of human rights abuse remain widespread in the country.

These, according to the Chief Justice, are in form of torture and ill treatment, poverty, sexual and gender-based violence, property deprivation, poor education, inadequate access to health services, limited access to justice and primitive cultural practices.

“We as a country must see to it that we build strong institutions that recognize the inherent dignity of each one of us. If one of us suffers indignity, we ought to rise to the occasion to defend that person,”he said.

Every December 10, Uganda joins the rest of the world to commemorate human rights day. This year’s celebrations are running under the theme, Get up, stand up for rights. The date was chosen to honour the United Nations General Assembly’s adoption and proclamation, on December 10, 1948, ofthe Universal Declaration of Human Rights (UDHR).

Katureebe said it was pertinent to note that lasting peace, security and good governance can never be achieved in any country without respect for human rights.

“It is, therefore, imperative that periodically, we take stock of what we have done well and where we have fallen short,” he said.

Katureebe reiterated that the target of the Judiciary is to ensure that everybody accesses justice. He cautioned the security agencies against violating the rights of suspects.

“If a person is alleged to have committed a crime, they should be arrested. But the arrest should be with view to taking him or her before a court of law for prosecution, conviction or acquittal.

Kaggwa, basing on the reports by the commission and other human rights institutions, regretted incidents and human rights violations the country continues to witness. These, according to Kagwa, included incidents of violations of freedom from torture, freedom of expression and association to deprivation of life.

He cited other forms of violation as brutal arrest of suspects, violence against journalists, deprivation of personal liberty,allegations of illegal detention and deprivation of property. Kagwa, however,noted that Uganda had made big strides in advancement of various human rights and freedoms by, among others, ratifying a number of regional and international instruments, promulgating the 1995 Constitution and enacting numerous laws.

He said the country had also established governance structures at various levels, streamlined human rights-based approaches in national planning and programming, and promoted the principle of affirmative action. The chairperson of the parliamentary committee on human rights, Jova Kamateeka, said human rights issues had since been mainstreamed by Parliament.

Kamateeka said this was reflected in Bills, programmes and other governance policies introduced in Parliament by the mandate of the committee on human rights.

“It provides guidance to MPs when analyzing Bills presented before them to check for compliance to human rights standards. It further promotes accountability to the general public and works towards creating an atmosphere that is free of human rights abuses,” she said. The Police spokesperson, Emirian Kayima, said the Police remain committed to the promotion and protection of human rights. He announced that the Uganda Police Human Rights Policy would be released this week to streamline issues of human rights in the operations of the Police. 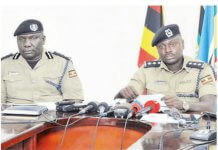