According to Police, Baker Kasumba, a resident of Avis Kivvulu in Ttula, Kawempe division in Kampala, was intercepted near the Northern Bypass flyover at Kalerwe by two unknown men who hit him on the head and later drove nails through his hands.

“We condemn the attack in the strongest terms it deserves,” he said.

Onyango noted that Uganda is a free country where everyone is free to express his or her political affiliation in any way they want.

Onyango said there were no cameras at the spot where Kasumba was attacked along the Northern Bypass. According to sources, when Kasumba was discharged from Mulago Hospital yesterday, he left in the company of security operatives.

New details show he was not the first

‘Not the first patient’ When contacted, the Mulago Hospital executive director, Dr Baterana Byarugaba, said Kasumba was discharged because he was not doing badly. “His condition can be managed as an outpatient instead of keeping him in the hospital. We removed the nails and the wounds are being treated, including those he sustained on his right eye and the forehead,” he said.

Byarugaba said they also subjected Kasumba’s hands to an X-ray and discovered that he did not sustain any fracture.

“We are now treating the wounds. We gave him medication including an anti-tetanus injection and antibiotics,” he added.

In a separate interview with a local television, Byarugaba said this was the second case the hospital had registered of a nailed person. He said another person had also been treated recently with nail wounds on his head.

To be taken to safe House for Protection

According to New Vision Kasumba had by last evening not yet returned to his home in Avis Kivvulu zone, Kawempe. It is said he is still under the protection of security operatives. Sources revealed that people like Kasumba, whose lives are deemed to be in danger, can be protected in safe houses.

While addressing lawmakers on the Human Rights Committee of Parliament this week, security minister Gen. Elly Tumwine underscored the importance of safe houses. He enumerated their roles, which include securing witnesses and people fearing for their lives, carrying out clandestine intelligence gathering and debriefing security assets.

“Rt. Hon. secretary-general Justin Kasule Lumumba visited our NRM party youthful supporter Kasumba in the casualty Wing of Mulago Hospital. Kasumba was attacked by goons on Wednesday night on his way back home and severely beaten. Two nails measuring six inches long were hammered into his palms as they accused him of supporting the ruling NRM party. Official statement to follow later.”

According to Baker Kasumba’s statement, on Wednesday, he left his workplace at Jesco Ham Shopping Centre at 10:00 pm and headed home. Along the way, Kasumba decided to visit his mother, who also resides in Kawempe.

“Kasumba said he decided to take a shorter route through Kalerwe where old vehicle spare parts are sold. As he was about to reach the flyover, two men came up to him and hit him on the head. He became unconscious and they nailed his hands together using six-inch nails,” Kampala Metropolitan Police spokesperson, Patrick Onyango, said in a statement.

According to Police, two ladies who were also searching for their missing child found Kasumba’s tormentors in the act and they made an alarm, which prompted the assailants to flee. Following the alarm, Police at Kibe Police Post responded and rescued the unconscious Kasumba. 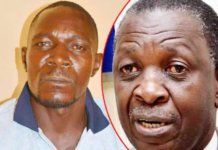