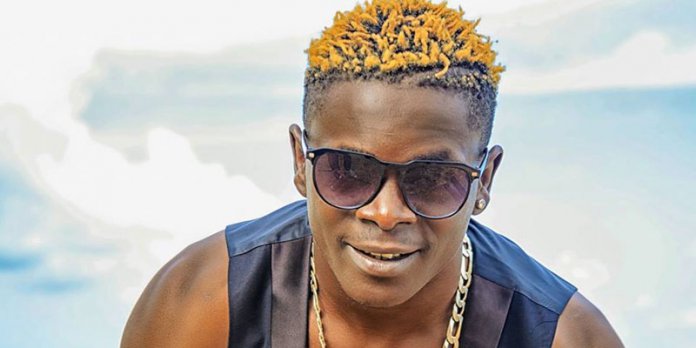 King Saha can sing about love for all we care, but when he lands head over heels, it becomes a matter of concern for his legion of fans.

He of shabby locks and rough skin has finally landed into a Kenyan chick, living in Entebbe.

Her name is Nana Candy, and like her boyfriend, she will not even let her closest friends into the secret of what her real name is.

Now that Saha is practicing what he preaches, or rather sings, Nana is telling her friends to call her Queen. Nana is an outgoing girl who never misses an event, even the ones for which Saha cannot access free tickets.

As long as she has company, she will make her day, evening and night happen. She is what is often described as a black beauty, with big eyes that she is fond of rolling in their sockets.

And she is as naughty as those rolling eyes, especially when giving details about her dates with Saha, complete with sex styles. They are a hairy couple; Saha with the colorful dreads and Nana with her artificial hairpieces. Her head does not know the feel of natural hair.

Her lips have never been free from pink or red lipstick. As a black beauty, Nana can never step out of her home to meet her king without makeup. At least she will ask for a minute to run to the salon for makeup before meeting him.

“Saha is my King. Call me Queen. I think I love that guy. I am that b***h who will fall in love with someone wholeheartedly. I am not very sure whether Saha loves me the way I do, but from the things he does for me, he is in love with me,” she conceded to a friend recently.

Nana went to Hana Mixed School, which, by its composition of foreign students, is considered an international school. That says much about her life.

She is a Kenyan, who first fell in love with a Nigerian and her body parts are now being held together by a Ugandan. Her love affair with the Nigerian man left her with a kid, which makes her a mother of one.

Although she treats King Saha like a baby, biologically speaking, she remains a mother of one. She says she is not bothered for coming into this relationship with a kid does not bother her. She is suspicious that Saha has many baby mamas he has not told her about.

However, she remains firm. “I am ready for competition,” is all she offers when asked about it.

According to her, she met Saha not long ago, while at Victoria Mall in Entebbe with her friend, she was approached by this “small boy dressed in yellow.” Noticing that she had not recognized him, he introduced himself as King Saha, with a wide smile that gave him the look of King Kong.

“I showed him attitude,” she now confesses. As she tried to leave the mall with her friend, he followed her and requested for her number. “Since I had first shown him attitude, I continued walking. He followed while pleading, so I asked my friend to give it to him to prove to him that I had not been subdued,” she reveals.

“A few hours later, while at home, he called and we chatted into the night. Our love started then. Can you imagine that guy is the first one to invite me for a walk in a jungle? Can you imagine he takes care of me like there is no tomorrow? He calls me baby booo ; that guy! I feel I am already in love yet I don’t know what he is up to! Saha is my life.”

In appreciation, King Saha has taken her on a tour of his house under construction. And if there is a new pick-up line to win a girl, it is taking her to a construction site and say, “Dear, this is ours.”