The Democratic Party (DP) has arranged a mega occasion to officially welcome local musicians, Joseph Mayanja aka Jose Chameleone and his brother, Pius Mayanja aka Pallaso, into the party. The duo announced their defection into the party recently.

According to DP president general Nobert Mao, Chameleone who has since expressed interest in standing for Kampala mayoral seat with Pallaso eying the Kawempe South parliamentary seat will be unveiled at a public function to be held at Nsambya Sharing Hall in Kampala today.

Chameleone has been a strong supporter of the National Resistance Movement (NRM) and has featured prominently in the music promoting election campaigns and of especially President Yoweri Museveni. He featured in all stars Mzee Tubonganawe, the signature hit for the 2016 NRM campaigns.

Mao disclosed the planned unveiling of the convert at a weekly party press conference in Kampala yesterday, in the company of other leaders of the DP bloc. Chameleone visited the party headquarters last week from where he confirmed his defection to the party causing excitement among the party supporters.

Chameleone subsequently tweeted: “ I thank the entire Democratic Party comrades for honoring me with this invite to your headquarters at City House today (Wednesday) evening to discuss the best way we can work together for the benefit of our countrymen and country at large.”

Chameleon first appeared at a national opposition function at the DP bloc Busoga reunion congregation at Kakindu Stadium in Jinja on May 29, 2019, where DP youths welcomed him and were given a hoe which is the symbol of DP.

Claiming a new spirit of unity and togetherness which is hovering around DP, Mao wooed the party supporters who had strayed to return. He pledged that they will be deployed appropriately.

Meanwhile, DP has called for a tax waiver on CCTV cameras to enable more Ugandans to install them in their homes and businesses. Condemning the latest killings, the party asked the Government to guarantee the security and safety of all Ugandans and their property. 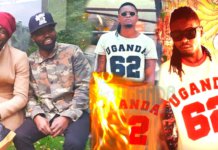 VIDEO: Weasel Manizo in a Bitter Fight with His Brother Curses Him and Burns His Clothes