Thousands of Sudanese held a second day of protests yesterday outside the army’s headquarters in Khartoum and in the vicinity chanting slogans against President Omar al-Bashir’s government, witnesses said.

Chanting “peace, justice, freedom,” they massed outside the army headquarters, which also houses Bashir’s official residence and the defence ministry, many of them having spent the night there. “After what we did on Saturday, we will not leave this area now until our mission is accomplished,” protester Osama Ahmed, who spent the night outside the compound said.

“We will not leave this area until he steps down,” he said, referring to Bashir. Some protesters also blocked a nearby bridge linking Khartoum with the northern Bahari district with rocks, causing huge traffic jams, witnesses said.

On Saturday, thousands of men and women launched the biggest anti-government rally since protests first erupted in December, reaching for the first time the fortified army headquarters. The army did not intervene, but riot police, who converged near the compound, fired teargas at protesters to disperse them, and some of the demonstrators hurled rocks at them, witnesses said.

And in a separate demonstration on Saturday, a protester died in Khartoum’s twin city of Omdurman, police said. Officials say 32 people have died since protests erupted in the African country on December 19 after a government decision to triple the price of bread.

Human Rights Watch has put the death toll at 51, including medics and children. Sudan’s protests have escalated into nationwide demonstrations against Bashir’s government, with protesters accusing it of mismanaging the economy, leading to soaring food prices and regular shortages of fuel and foreign currency.

Bashir has acknowledged that the economic concerns raised by protesters were “legitimate”, but he imposed an emergency rule on February 22 after an initial crackdown failed to rein in the protests. Protest organizers chose April 6 for the rally outside the army headquarters as it marked the 1985 uprising that toppled the then regime of president Jaafar Nimeiri. 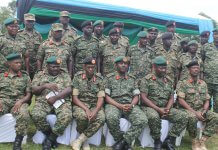 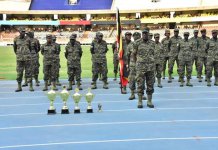