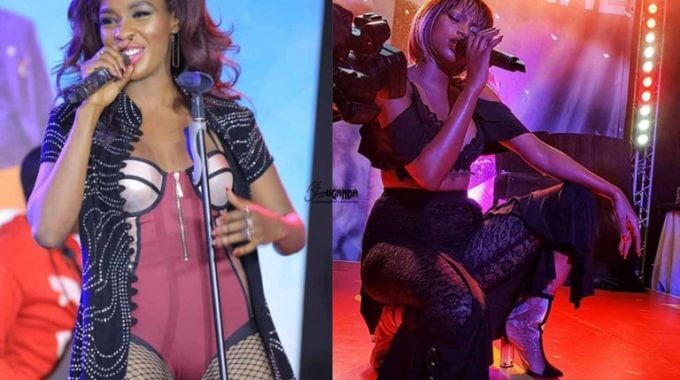 At this rate, we shall not need the stage battle between King Cindy and Queen Sheebah. This can as well remain a cat fight of words. During the monthly performance of Band Cindy at Fusion Auto Spa, Cindy went bare knuckle on Sheebah.

“She is very vulnerable and under a record label that buys her shoes, clothes, sanitary pads, pays for her videos and music promotion,” Cindy said in reference to Sheebah.

Sheebah is under the management of Team No Sleep that is owned by Jeff Kiwa.

“I think she qualifies to be a doll, not so?”

She wondered amid applause from her fans.

“I will neither apologize to my fans nor hers. Those are my words, it is up to her to take it the way she wants,” she added as a matter of emphasis.

Cindy took on more than Sheebah and also responded to those who have sided with her nemesis. She assured Vinka to kneel down when she finds her

“Since it is our cultural norm to kneel down while greeting people who are older and superior to you.”

She advised Vinka to have conversations with those of her ilk, the ones who have just been singing for about two years only.

“If you cannot do that, just shut up,” she rudely put it.

The last time Cindy and Sheebah performed together was at Fusion Auto Spa. Although Cindy wants the stage battle, Sheebah is running away from it.

She even recently announced she would not be staging any concert in the near future. In a sudden twist, Nina Roz (Sheebah’s friend turned foe) said the battle should be about her.

“The battle should have a purpose like giving the money to orphans or educate young artistes like me. They have been in the industry for long so they should do it for us young artists,” she reasoned.