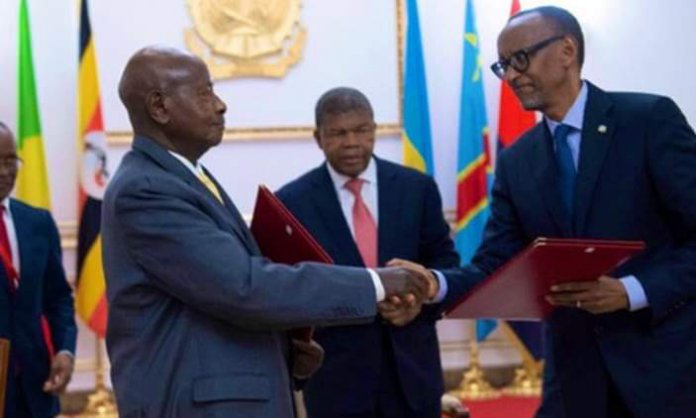 “We are going to raise the cost on that part of anybody who wants to destabilize our security,” charged Kagame while presiding over the swearing-in of new government officials and Rwanda Defence Force (RDF) leaders.

“The cost is going to be very high,” he emphasized.

Kagame said they have shed blood to protect the country and are not ready to tolerate those seeking to cause anarchy.

“They hide behind politics, democracy, freedom, that we actually want, it is our responsibility to ensure that there is democracy, there is peace, there is freedom, there is everything in our country. Primarily we are the ones responsible first and foremost, we, me and you,” he said.

“You cannot be here benefitting from the peace and security that we have created, that we have paid for in blood over many years and then you do things behind our backs and cause us problems. We will put you where you belong, there is no question about it,” the President added.

The warning comes amid intensifying criticism of Kagame’s policies in Rwanda by activists in the country and diaspora.

This development also comes in the wake of heightened tension between Uganda and Rwanda.

While this is not a new threat, the pattern underscores Kagame’s plans to possibly wage war.

He has previously warned that his armed forces have for a long period of time developed adequate capacity to “wage war” against Rwanda’s enemies “if necessary.”

Kagame, who was visibly disturbed as he spoke today, said Rwanda wants to “maintain that situation where we can take our security and peace for granted, we need it, we have needed it for a long time and we shall make sure it is there.”

In a resigned tone, Kagame said, “When it is here, we are responsible, we are in charge. When it is outside, the noises being made by neighboring countries and beyond, that one there is not much I can do about it. The best way is to ignore it.”

“We want to maintain that situation where we can take our security and peace for granted, we need it, we have needed it for a long time and we shall make sure it is there.”

Tensions between Rwanda and Uganda have escalated in recent months over counter accusations of espionage and support for rival armed movements.

While Kagame has at public functions blasted Ugandan authorities for reportedly supporting his opponents, Museveni maintains he will not discuss bilateral issues in the media.

Kagame didn’t mince words, putting on notice opponents, “The cost is going to be very high, whether it’s the means that we are going to put into that to make sure that we have everything it takes to ensure the security and stability of our country and our people, and our development.”

He added: “It’s also the cost mainly that those people who want to destabilize our country are going to incur, it’s going to be a very high cost on their part, absolutely. And I mean it, and you know that I mean it.”

There were hopes that the situation would be addressed through bilateral talks between the two countries.

However, Uganda on Thursday announced that the talks would not take place.

“The media is hereby informed that the Second meeting of the Adhoc Commission on Luanda MoU between Uganda and Rwanda scheduled for November 18, 2019 in Kampala has been postponed at the request of Rwanda,” said Uganda government spokesperson Ofwono Opondo.

“A new date will be communicated,” he added on his official Twitter handle.

Uganda’s Chief of Defence Forces (CDF) Gen David Muhoozi this week passed out an entire Division of combatants to secure the mountainous areas of Rwenzori.