British Prime Minister Theresa May yesterday began a final push to persuade parliament to back her Brexit deal as the European Court of Justice ruled Britain was free to halt withdrawal from the bloc unilaterally.

The court ruling will fuel calls for a second referendum to stop Brexit and comes on the eve of a once in-a-lifetime vote by MPs that will determine the fate of Brexit and could lead to May’s downfall.

Her splintered government appears to be facing a heavy defeat in parliament today on the draft withdrawal agreement she signed with Brussels last month.

The text defining terms on which the island nation leave sits main trading partner after 46 years is the most important to go before the House of Commons in years. A big loss could spark immediate challenges to May from both within her Conservative Party and the opposition Labour ranks.

It would also leave the tortuous Brexit process in a stateof flux — and raise the prospects of a no-deal scenario — less than four months before the March 29 departure date. May is under pressure to delay the vote and attempt to negotiate more concessions ahead of a planned summit with 27 fellow EU leaders on Thursday and Friday.

But Environment Secretary Michael Gove, an influential Brexit backer, told BBC radio that the vote would go ahead and cast doubt on any major renegotiation. He warned that “a fundamental reopening” of the withdrawal agreement risked EU countries wanting to change it “in a way that may not necessarily be to our advantage”.

EU leaders have ruled out any change to the divorce deal but some EU officials have mentioned the possibility of changes to the accompanying political declaration on future trade ties between Britain and the EU after Brexit.

“either potentially no Brexit… or we could have a situation where we have the very uncomfortable circumstances of no deal”.

The Bank of England and the Treasury warn that Britain crashing out of the EU could trigger an economic crisis.

Asked if a parliamentary defeat for May could actually strengthen her hand in any re-negotiation, he said: “No, I think it would be the equivalent of breaking the cricket bat in half before the captain went to the crease.”

‘Risk’ of Labour in power

May spoke with EU President Donald Tusk and Irish Prime Minister Leo Varadkar and was reportedly meeting MPs yesterday in an attempt to win them over.

May’s team insists that her vision offers the cleanest break between the UK and EU that Brexit supporters could hope for at this late stage.In an interview with the Mail on Sunday, May also raised the specter of a nearly election and a possible return to power of the Labour Party for the first time since 2010.

May said the prospects of opposition leader “Jeremy Corbyn getting his hands on power is a risk we cannot afford to take.” Newspapers have identified more than six current and former ministers in May’s cabinet who are also ready to run for her job should she falter over the coming days. While not ruling himself out of the race, Gove said it would be “extremely unlikely” he would be prime minister. “Talk about the leadership at the moment is a distraction from the critical question” of the Brexit deal, he said.

EU supporters, meanwhile, hailed the European Court ruling spelling out that the consent of other EU member states is not required for Britain to revoke its intention to leave.

“The United Kingdom is free to revoke unilaterally the notification of its intention to withdraw from the EU,” the court said. But Gove said:

“We don’t want to stay in the EU… We voted very clearly.”

May would have a tough job securing better divorce terms acceptable to the Northern Irish DUP party that has propped up her government.European officials said they might be able to find a way to offer a token concession that May could take back to London.

The two sides might“work on the (accompanying) protocol or clarify a point that is deemed important so that she can take it back to parliament”, an informed European source told AFP. May would then be expected to submit the touched-up version for a second vote at an unspecified date in December or January 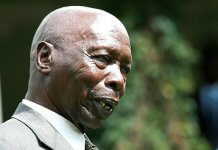