Over 1,000 people from different walks of life are said to have fallen prey to a con scheme by self-styled Bishop Fred Ntabazi, who they accuse of fleecing them of billions of shillings in a bogus cryptocurrency deal.

According to Saturday Vision some of the victims are high profile people and, therefore, fear to report the matter, but others have come out and petitioned authorities. Sources revealed that the victims, who have lost over sh15b, include senior army and Police officers, pastors and businesspersons.

Caleb Rutetebya is one of the victims who invested over sh100m in Pio Digital Academy Limited, a forex trading scheme that was situated on Padre Pio Building located on Lumumba Avenue, in Nakasero, a city suburb.

Rutetebya said he has lost sh108m ever since he joined the scheme in 2019, and that many of his fellow victims, who were eager to invest and make quick money, have lost billions of shillings, too.

“Ntabazi gave me only interest for four months and that was it. He would tell his agents to convince people to invest in his company. Two weeks after someone has deposited money, Ntabazi would pay that client 10% of their investment every week, as profit on investment, and, according to the agreement, this would go on for a year,” Rutetebya said on behalf of his fellow victims.

Ntabazi was the lead preacher at One Light International Ministries, a church which was situated on the fifth floor of Padre Pio Building. Sources said Ntabazi recruited agents in all arenas, including the corporate world, with most of them being young Born-again Christians.

Rutetebya said many of the victims borrowed money from banks, saving schemes and loan sharks, while others sold land, cars, houses and cattle, to invest in Ntabazi’s forex trading firm.

“There is someone I know who borrowed sh10m from a bank and used her house as collateral, but the house has since been taken by the bank,” Rutetebya said.

He added that the minimum amount that clients would be asked to invest in the business was sh5m, and that this would, after two weeks, start fetching the client 10% (sh500,0000) every week as interest on investment for a year. Others described Ntabazi as a charming smart man who was always soft-spoken and kind that it would be hard for anyone to suspect him.

“But we discovered that he would pay the old clients using money he would get from new clients, and the cycle would continue. So, when new clients were not forthcoming towards the end of 2019, he started giving excuses,” another victim, who preferred anonymity, said. 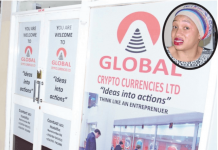