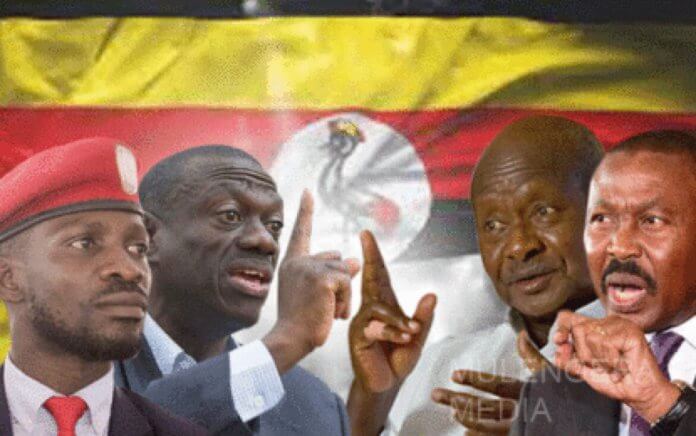 A plan by the five opposition presidential candidates to secure enough votes in next year’s election to deny the incumbent Yoweri Museveni an outright victory has been revealed.

The five recently signed a cooperation pact after the arrest of Kyagulanyi and Amuriat, declaring the approach of “different fronts, one struggle”.

Sources within this wider opposition syndicate, which views all opposition candidates as allies in the struggle to defeat Museveni, say if their votes combined could get to 50%, Museveni would not have an outright victory.

Therefore, they say, they are confident that they will win in the subsequent re-run of the election when they unite and rally behind a single candidate. A presidential candidate needs more than 50% of the vote for outright victory.

“This election is not like any other before. We have a regional approach with a national goal of capturing power. We are mobilising regionally,” a source said.

“As it stands, there is no way Museveni can get 50% of the vote. He will just declare himself winner and that is when real action will begin,” the source added.

The source refused to explain this “real action”, but we understand it is ‘plan B’ of the FDC strongman, Col (rtd) Dr. Kizza Besigye. For the first time in almost two decades, Besigye is missing out on the ballot paper.

In his speech after declining to stand as FDC presidential flag-bearer in the forthcoming election, Besigye was clear that he would not participate in ‘plan A’ (elections), but would focus on developing ‘plan B’ On the campaign trail with Amuriat, Besigye has been shedding some light on his plan.

In Hoima district, for example, he said it is for   Ugandans interested in change to vote for the Opposition, while in his ‘plan B’, he wants to rally them to embrace other alternatives to achieve change.

He did not reveal the alternatives, but he recently said in his ‘plan B’, they assert that the means to cause regime change, to reclaim their influence, is to fight. “Plan B is a plan for fighting,” the four-time presidential contender declared on August 28, at his offices on Katonga Road in Kampala.

However, he added that there is a wide range of fighting and fighting does not necessarily mean taking up arms against the Government.

Explaining their regional matrix, sources within this syndicate say Kyagulanyi is counting on the youth vote in all regions, particularly Buganda and Busoga, where he says he has strong support.

Muntu is banking on the western vote and that of disgruntled National Resistance Movement (NRM) members, soldiers, Ugandan Rwandans and white-collar workers, while Tumukunde on the Kigezi subregion and also on the west and disgruntled NRM members, including a sizeable number of Muslims.

He is also counting on soldiers, especially veterans and the business community who they say worry about security of their property after regime change.

Tumukunde, who is the most senior retired Uganda People’s Defence Forces (UPDF) officer to challenge Museveni in the general election, is also counting on the persons with disabilities’ (PWDs) vote since he is one of the two candidates with disabilities in the race and he is “not keeping quiet about it”.

Amuriat’s camp speaks of significant support from the sub-regions of Teso, Bugisu and Sebei and generally non- Baganda across the board who believe the eastern region should be given a chance to lead the country this time.

However, analysts say he has little name-recognition outside his home region of Teso and this may prove to be his undoing.

Mao, taking a second shot at the presidency, hopes that people in the north will vote for him and those in Buganda, where his party has strong roots.

Sources also say that his failure to tame the contradictions within the party hence the exodus of people (over 10 MPs) from the party to NUP might turn out to be a blessing in disguise for him.

“His woes within DP, whatever their origin, have been perceived as an anti northerner expression in a largely Buganda-dominated party. Look at the names of those that have abandoned him.  This could serve to galvanize the non-Baganda vote in his favor,” sources said