Home Politics “Your time is Out” Bobi sends a strong message to M7 as...

Two journalists who are part of Hon. Kyagulanyi Robert Ssentamu’s campaign trail have been injured by bullets in Masaka today.

Ghetto TV’s Muhinda Ashraf Kasirye and Ali Mivule of NTV were reportedly injured during a scuffle that involved the Police.

In the first incident that happened on Sunday morning, Ashraf Kasirye, a reporter with Ghetto Media was shot at and rushed to Masaka hospital in critical condition.

“Comrade Ashraf Kasirye has been shot and is in critical condition. Doctors are doing their best to save his life, “Kyagulanyi posted on his social media accounts.

Whereas details and circumstances surrounding the incident are still scanty, it is said that police was trying to disperse supporters who were moving with Kyagulanyi who is currently in Masaka by firing tear gas and suspected bullets.

“These are pictures from hospital, where our brother Kasirye Ashraf was rushed to immediately after being shot on the head! Pleading with God to save the life of this wonderful soul” Bobi wrote on his Facebook page

“To you Gen. Museveni and the criminals you command to target and murder Ugandans, you must understand that your time is soon running out. This is our country.”

It is said Kasirye was on top of Kyagulanyi’s vehicle as the presidential candidate returned from church in Masaka.

NBS senior Reporter, Daniel Lutaaya who was riding on a Boda Boda that was shot at during the mayhem in Masaka earlier today, is currently in hospital. 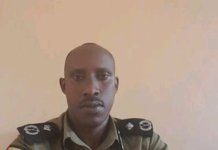